Abstract
Carcharodontosauria is a group of medium to large-sized predatory theropods, distributed worldwide during the Cretaceous. These theropods were probably the apex predators of Asiamerica in the early Late Cretaceous prior to the ascent of tyrannosaurids, although few Laurasian species are known from this time due to a poor rock record. Here, we describe Ulughbegsaurus uzbekistanensis gen. et sp. nov. from the early Late Cretaceous (Turonian) of Central Asia, which represents the first record of a Late Cretaceous carcharodontosaurian from the region. This new taxon is represented by a large, isolated maxilla from the Bissekty Formation of the Kyzylkum Desert, the Republic of Uzbekistan, a formation yielding a rich and diverse assemblage of dinosaurs and other vertebrates from fragmentary remains. Comparison of the maxilla with that of other allosauroids indicates Ulughbegsaurus was 7.5–8 m in body length and greater than 1000 kg in body mass, suggesting it was the previously unrecognized apex predator of the Bissekty ecosystem while smaller known tryannosauroids and dromaeosaurids were probable mesopredators. The discovery of Ulughbegsaurus records the geologically latest stratigraphic co-occurrence of carcharodontosaurid and tyrannosauroid dinosaurs from Laurasia, and evidence indicates carcharodontosaurians remained the dominant predators relative to tyrannosauroids, at least in Asia, as late as the Turonian.
Keywords: Uzbekistan, Bissekty Formation, Carcharodontosauria, dinosaur, Late Cretaceous, Tyrannosauroidea 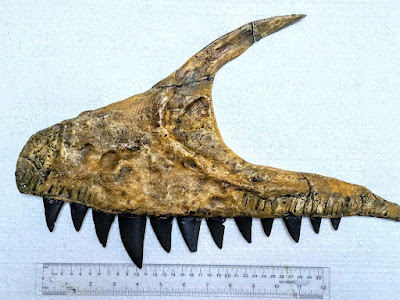 Systematic palaeontology
Dinosauria Owen, 1842
Saurischia Seeley, 1887
Theropoda Marsh, 1881
Tetanurae Gauthier, 1986
Allosauroidea Marsh, 1878
Carcharodontosauria Benson et al., 2010
Ulughbegsaurus uzbekistanensis gen. et sp. nov.
Holotype: UzSGM 11-01-02, a left maxilla.
Diagnosis: Carcharodontosaurian theropod with a series of shallow, oval depressions on the lateral surface along the ventral edge of maxilla; tubercles along with the ridged rim of the antorbital fossa; vertically oriented ridges on the lateral surface of maxilla and large foramina at a dorsal edge of dental plates in maxilla.
Referred specimens: CCMGE 600/12457 is a jugal ramus of a left maxilla and ZIN PH 357/16 is a posterior end of the right maxilla, previously referred to the dromaeosaurid Itemirus medullaris ([18]: see ‘5. Comments on isolated teeth and bone fragments of theropods from the Bissekty Formation’). 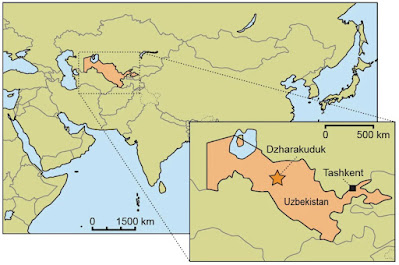 Locality and horizon: The holotype and referred specimens were recovered at Dzharakuduk, central Kyzylkum Desert, Navoi Viloyat, Uzbekistan, where the Upper Cretaceous (middle to upper Turonian, ca 90–92 million years ago) Bissekty Formation is exposed; the precise location is unknown as geographic coordinates were not noted in the field. The holotype was brought to UzSGM by a field team member of Lev Alexandrovich Nessov.
Etymology: ‘Ulughbeg’ refers to Timurid sultan Ulugh Beg, in recognition of his early scientific contributions as a fifteenth-century astronomer and mathematician in central Asia region (now Uzbekistan). ‘Sauros’ meaning reptiles in Latin. Specific name, ‘uzbekistan’, refers to the Republic of Uzbekistan.
Conclusion:
Although carcharodontosaurids are thought to be widespread in the early Late Cretaceous of Asia, few such fossils have been recovered due to the poor rock record from that time. Ulughbegsaurus represents a previously unknown apex predator of the Turonian Bissekty Formation and the first reported carcharodontosaurian species from Late Cretaceous Central Asia. This taxon is one of the latest surviving Laurasian carcharodontosaurians and reveals the latest known stratigraphic co-occurrence between a carcharodontosaurian and a tyrannosauroid (i.e. Timurlengia). The latter suggests that carcharodontosaurians were still dominant predators in the Turonian, at least in Central Asia, while tyrannosauroids were smaller mesopredators. Because of the geographic location between East Asia and Europe, it remains uncertain if Ulughbegsaurus had affinities with European or East Asian/Gondwanan carcharodontosaurians due to unresolved phylogenetic relationships. It is probable that fragmentary bones and isolated teeth from the Bissekty Formation of Uzbekistan may belong to carcharodontosaurians.
Kohei Tanaka, Otabek Ulugbek Ogli Anvarov, Darla K. Zelenitsky, Akhmadjon Shayakubovich Ahmedshaev and Yoshitsugu Kobayashi. 2021. A New Carcharodontosaurian Theropod Dinosaur Occupies Apex Predator Niche in the early Late Cretaceous of Uzbekistan. Royal Society Open Science. DOI: 10.1098/rsos.210923
Ulughbegsaurus uzbekistanensis, a giant carcharodontosaurid from Uzbekistan. This new top predator dwarfs the previously largest known theropod from the region, the tyrannosauroid Timurlengia euotica.
facebook.com/JuliusCsotonyi/posts/10157879938181396
Newly discovered dinosaur predated tyrannosaurs — and at the time was a bigger apex predator
cbc.ca/news/canada/calgary/ulughbegsaurus-1.6166455
smithsonianmag.com/science-nature/new-giant-carnivorous-dinosaur-was-terror-smaller-tyrannosaurs-180978599/ 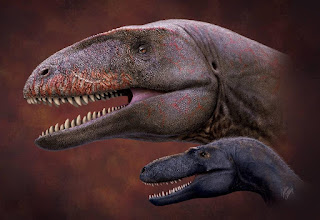