Abstract
Marzanoptera tersillae gen. & sp. nov., a new balaenopterid from the Pliocene of the Piedmont in north-west Italy, is described based on a partial skeleton and compared with other living and fossil baleen whales. Marzanoptera tersillae shares characters, such as the shape of the supraoccipital, glenoid fossa of the squamosal and zygomatic process of the squamosal, with ‘Balaenoptera’ bertae. We used a computed tomography scan to view parts of the skull that were otherwise impossible to observe, such as the periotic. A phylogenetic analysis based on 355 character states scored from 87 taxa revealed a well-resolved hypothesis of relationships for Balaenopteridae and a general phylogenetic hypothesis for chaeomysticetes. The monophyly of all superfamily- and family-rank clades and of crown balaenopterid species was confirmed. In addition, a monophyletic group including most basal thalassotherian taxa was recovered. The mollusc fauna associated with the specimen was autochtonous and constituted a residual fossil assemblage indicative of an environmental context located below the base of the storm wave, characterized by a low-energy hydrodynamic regimen. Many shark teeth have been found in close association or embedded within the bones, suggesting a possible scavenging action by two shark species on the whale carcass.
Keywords: Balaenopteridae, phylogeny, taphonomy, whale falls
SYSTEMATIC PALAEONTOLOGY
Class Mammalia Linnaeus, 1758
Order Cetacea Brisson, 1762
Suborder Mysticeti Flower, 1865
Infraorder Chaeomysticeti Mitchell, 1989
Parvorder Balaenomorpha Geisler & Sanders, 2003
Superfamily Thalassotherii Bisconti, Lambert & Bosselaers, 2013
Epifamily Balaenopteroidea Gray, 1868
Family Balaenopteridae Gray, 1864
Genus Marzanoptera gen. nov.
Etymology: The genus name is composed of Marzano-, shortened from San Marzanotto, the locality of the discovery of the holotype skeleton, and the Greek φτερό, wing, referring to the wide and long forearms of balaenopterid whales. 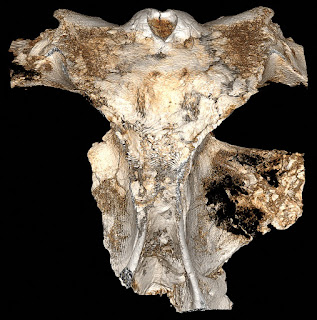 Marzanoptera tersillae sp. nov.
Etymology: The fossil skeleton was discovered by Tersilla Argenta, for whom it was named.
Holotype: Specimen 207.13307 of the inventory of EGPPA-MPTA institution in Asti. The specimen includes most of the skull, with one periotic in articulation, seven vertebrae and nine ribs. 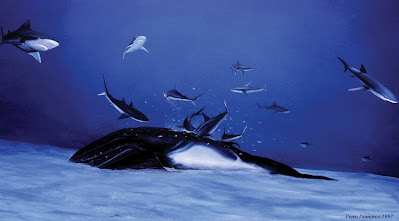