Abstract
A new genus and new species of ginglymodian is described from the Aptian Grès supérieurs Formation of the Savannakhet Basin, Laos (Lao People's Democratic Republic), found at the Ban Lamthouay locality. The fish is known from a single isolated head, which shows enough diagnostic characters to characterize a new taxon. It represents the first named actinopterygian fish from the Mesozoic of Laos. Among the derived characters are a very short and deep head, a series of very deep anterior infraorbitals, and a mosaic arrangement of the suborbitals. Recognition of this new form led us to identify isolated bones previously found in the Thai Khok Kruat Formation in Thailand, a lateral equivalent of the Grès supérieurs Formation. Two localities, Ban Saphan Hin and Khok Pha Suam, have yielded remains, in particular bones of the skull roof and of the circumorbital series as well as a partial postcranial body, assignable, with caution, to the new genus. When included in a cladistic analysis, the new taxon is placed at the base of the lepisosteoid lineage, together with Isanichthys known from an older formation in Thailand. The phylogenetic pattern obtained differs in some details from previous analyses and points out the pivotal role that some taxa play in the reconstruction of the phylogenies of ginglymodians. This new taxon enriches the diverse Late Jurassic–Early Cretaceous ginglymodian assemblage in South-east Asia, which surprisingly shows no evidence of teleosts.
Keywords: systematics, Holostei, Mesozoic, stratigraphy, freshwater environment 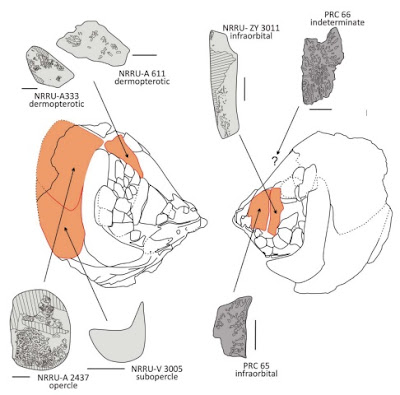 Holostei Müller, 1844 (sensu Grande 2010)
Ginglymodi Cope, 1872 (sensu Grande 2010)
Lepisosteiformes Hay, 1929 (sensu López-Arbarello 2012)
Genus Lanxangichthys gen. nov.
Type species. Lanxangichthys alticephalus gen. et sp. nov.
Diagnosis. As for the type and only species.
Derivation of name. From the Kingdom of Lan Xang, Kingdom of the ‘million elephants’ (1354–1070 BC), which covered the main part of the Lao People’s Democratic Republic and of the Isan region in Thailand, the area where the genus is found; and ichthys, meaning fish in Greek.
Lanxangichthys alticephalus sp. nov.
Derivation of name. From the Latin altus, meaning high or deep, and cephalicus, meaning head, in reference to the deep head of the new species.
Locus typicus. Ban Lamthouay, Tang Vay District, Savannakhet Province, Laos.
cf. Lanxangichthys (Figs 4A–H, 5, 6)
Locality. Ban Sapan Hin, Nakhon Ratchasima Province, Thailand.
Lanxangichthys sp. (Figs 4I, J, 6)
Locality. Khok Pha Suam, Ubon Ratchathani Province, Thailand.
Conclusions:
Lanxangichthys alticephalus represents a new and strange ginglymodian and confirms the high diversity of this group during the Late Jurassic and Early Cretaceous in South-east Asia. Although not related to each other, this species belongs to the ginglymodians with deep and short heads, which is a morphotype already present in the Triassic with the Chinese genera Luoxiongichthys and Kyphosichthys, for instance (Wen et al. 2012; Sun & Ni 2017). This morphotype corresponds to an effective and repeated mode of life, located at the opposite position to gars in body morphospace. The new taxon also provides interesting new data about the faunal connection that links the Gres superieurs and the Khok Kruat formations. Its inclusion in a phylogenetic analysis blurs slightly the signal obtained in previous analyses, but this is an interesting clue that the phylogenetic patterns formerly obtained are probably too simple. Lanxangichthys, together with other genera such as Isanichthys, Neosemionotus and Luoxiongichthys, may play a pivotal role in the understanding of the evolutionary history of this diverse group of fishes.
Lionel Cavin, Uthumporn Deesri, Monette Veran, Bounsou Khentavong, Pratueng Jintasakul, Phornphen Chanthasit and Ronan Allain. 2019. A New Lepisosteiformes (Actinopterygii: Ginglymodi) from the Early Cretaceous of Laos and Thailand, SE Asia. Journal of Systematic Palaeontology. 17(5); 393-407. DOI: 10.1080/14772019.2018.1426060
Researchgate.net/publication/323032779_A_new_Lepisosteiformes_from_the_Early_Cretaceous_of_Laos_and_Thailand
Le menu des spinosaures s’étoffe
dinosauria.org/blog/2018/05/15/le-menu-des-spinosaures-setoffe
swiss-systematics.ch/en/new_species_swiss_made_2021/new_species_swiss_made_2
เขียนโดย pskhun ที่ 4:12 AM