Abstract
A new genus of the family Sparassidae is described from Madagascar: Thunberga gen. nov. It can be distinguished from other genera of the Heteropodinae by its different cheliceral dentition and eye arrangement as well as by its uniquely dotted prosoma. Four species are transferred to the new genus: T. hildebrandti (Järvi, 1912) comb. nov. (from Rhitymna Simon, 1897a), T. malagassa (Strand, 1907) comb. nov. (from Olios Walckenaer, 1837), T. nossibeensis (Strand, 1907) comb. nov. (from Olios), T. septifer (Strand. 1908) comb. nov. (from Olios, elevated to species rank). T. hildebrandti comb. nov. is recognised as junior synonym of T. nossibeensis comb. nov. One species is described for the first time: Thunberga greta spec. nov. (female, Madagascar). The systematic placement within the family and the character “anterior epigynal pocket” are discussed.

Etymology. Named after Greta Thunberg (*2003 in Sweden), a young and courageous climate activist fighting against global warming, ignorant stakeholders and for a better future on our planet. In fact, global warming and other issues caused by humans affect all parts of the nature including Madagascar’s nature in general and its spider fauna in particular. Gender is feminine.

Natural History. Nothing is known so far about the natural history of species of this new genus. No information on labels were available either. Roger (2018: fig. 20d) published a photo of a spider most likely belonging to Thunberga gen. nov. If so, it might well be that those spiders are nocturnal hunters in the foliage (Roger mentions ylang-ylang trees in Combani). 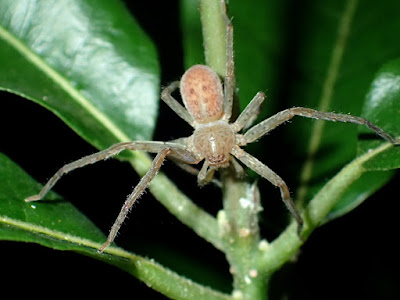