[PaleoMammalogy • 2020] Mukupirna nambensis • A New Family of Diprotodontian Marsupials from the latest Oligocene of Australia and the Evolution of Wombats, Koalas, and their Relatives (Vombatiformes)


Abstract
We describe the partial cranium and skeleton of a new diprotodontian marsupial from the late Oligocene (~26–25 Ma) Namba Formation of South Australia. This is one of the oldest Australian marsupial fossils known from an associated skeleton and it reveals previously unsuspected morphological diversity within Vombatiformes, the clade that includes wombats (Vombatidae), koalas (Phascolarctidae) and several extinct families. Several aspects of the skull and teeth of the new taxon, which we refer to a new family, are intermediate between members of the fossil family Wynyardiidae and wombats. Its postcranial skeleton exhibits features associated with scratch-digging, but it is unlikely to have been a true burrower. Body mass estimates based on postcranial dimensions range between 143 and 171 kg, suggesting that it was ~5 times larger than living wombats. Phylogenetic analysis based on 79 craniodental and 20 postcranial characters places the new taxon as sister to vombatids, with which it forms the superfamily Vombatoidea as defined here. It suggests that the highly derived vombatids evolved from wynyardiid-like ancestors, and that scratch-digging adaptations evolved in vombatoids prior to the appearance of the ever-growing (hypselodont) molars that are a characteristic feature of all post-Miocene vombatids. Ancestral state reconstructions on our preferred phylogeny suggest that bunolophodont molars are plesiomorphic for vombatiforms, with full lophodonty (characteristic of diprotodontoids) evolving from a selenodont morphology that was retained by phascolarctids and ilariids, and wynyardiids and vombatoids retaining an intermediate selenolophodont condition. There appear to have been at least six independent acquisitions of very large (>100 kg) body size within Vombatiformes, several having already occurred by the late Oligocene. 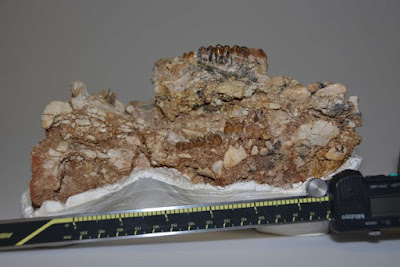 Holotype: AMNH FM 102646 (previously, QMAM 16824), a badly crushed cranium (preserved length = 197 mm; dorsal surface not preserved) with left and right P3-M4, and associated partial postcranial skeleton comprising vertebrae, ribs, left and right scapulae, left humerus, left ulna, left radius, left and right femora, left tibia, left fibula, and parts of the autopodia. The adult dentition is fully erupted, except possibly for M4, which does not appear to be in line with the occlusal surfaces of M1-3 (although this may be the result of post-mortem displacement); the molars are only lightly worn. In the postcranium, most fracturing has occurred at the epiphyseal plates. Collectively this suggests that this individual was probably a late subadult or young adult.

Etymology: The generic name is from the words muku (“bones”) and pirna (“big”) in the Dieri (Diyari) language traditionally spoken in the area around Lake Eyre and refers to the large size of the animal. The species name nambensis is after the Namba Formation in which the only known specimen was found. 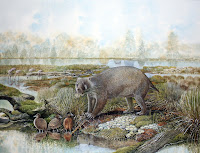 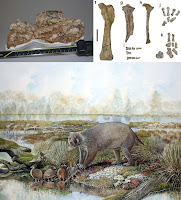 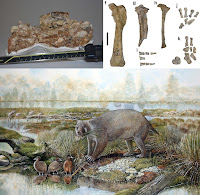