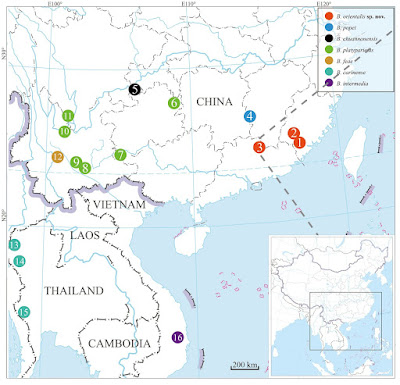 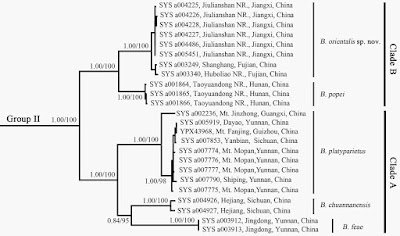 Remarks: The genus Brachytarsophrys was established with designating Leptobrachium carinense Boulenger, 1889 as the type species (Tian & Hu, 1983). However, from the original literature, the examined specimen of L. carinense by Tian & Hu (1983) was collected from Jingdong, Yunnan, China, and should not be identified as B. carinense but as B. feae (Boulenger, 1886).

Distribution and habitats: Currently, B. carinense is recognized from southern Myanmar and adjacent northern Thailand at elevations of 800 m and upwards. This toad hides in crevices between rocks or between the roots of shrubs during the day (Boulenger, 1889; Taylor, 1962).

Distribution and habitats: The species occurs in the central highlands of southern Vietnam and Laos at elevations above 900 m. Most specimens have been discovered in deep crevices between the rocks or boulders of streams. Loud, harsh male croaks can be heard at all times of the day and night (Smith, 1921).

Distribution and habitats: The species is distributed in Hejiang and Junlian counties, Sichuan Province, southwestern China, at 800 to 1 400 m a.s.l.. Specimens are found in or near montane streams surrounded by lush vegetation. They usually hide in crevices between rocks or dirt burrows in streams during the day. Males emit a series of croaks at about 23:00h. The spawning season is around the middle of May (Fei & Ye, 2001).

Distribution and habitats: This species is currently recognized from northern Myanmar and Yunnan Province in southwestern China at 650 to 2 100 m a.s.l.. Specimens are found in montane streams, under rocks or deep burrows surrounded by moist evergreen broadleaf forests. Male individuals begin to emit a series of croaks in April. The spawning season is from May to June (Fei & Ye, 2009; this study). 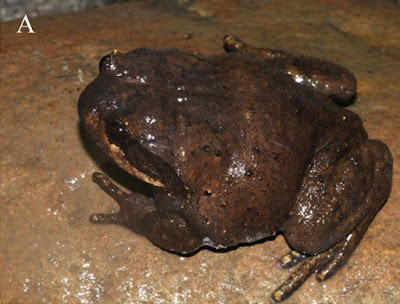 Etymology: The specific name “orientalis” refers to the distribution of the new species, which is the easternmost species within the genus Brachytarsophrys.

Distribution and habitats: Currently, Brachytarsophrys orientalis sp. nov. is only known from the Jiulianshan Nature Reserve in Jiangxi Province and Gutian Township and Huboliao Nature Reserve in Fujian Province, China, at 200 to 700 m a.s.l.. This species is found under rocks in montane streams surrounded by moist subtropical evergreen broadleaf forests (Figure 1B). All male individuals were observed in August and emitted a series of croaks from hidden positions. 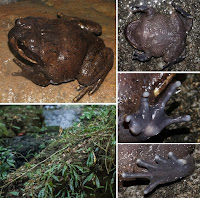 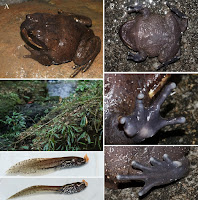 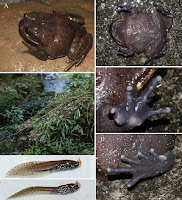