Abstract
The genus Chiropterotriton is endemic to Mexico with a geographical distribution along the Sierra Madre Oriental, the Trans Mexican Volcanic Belt and the Sierra de Juárez. The recent use of molecular tools has shown that Mexico’s amphibian diversity is highly underestimated, including a large number of cryptic, unnamed species. Chiropterotriton has 18 described species including terrestrial, arboreal and cave-dwelling species. In previous molecular studies, the presence of multiple undescribed species was evident. We present a phylogenetic hypothesis based on mitochondrial data, which includes all described species and six undescribed taxa. Based on the morphological analyses and, when available, combined with molecular data, we describe five new species of the genus; Chiropterotriton casasi sp. nov., C. ceronorum sp. nov., C. melipona sp. nov., C. perotensis sp. nov. and C. totonacus sp. nov. In addition, we redescribe two others: Chiropterotriton chiropterus and C. orculus, and provide a comparable account of one additional sympatric congener. This increases the number of species in the genus to 23, which represent a considerable component of Mexican plethodontid richness. 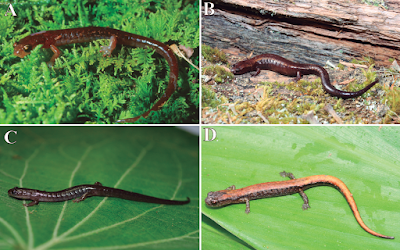 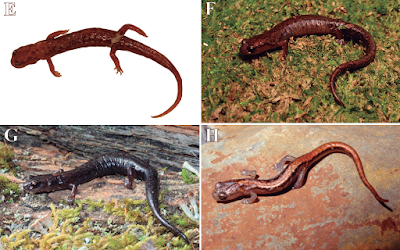 Conclusions:
The genus Chiropterotriton, an endemic group of Mexican salamanders, has been a taxonomic challenge to researchers for many years. Previously published molecular data indicated that a number of undescribed species were present, but lack of a thorough morphological analysis had stalled the advances in the description of the diversity of this group. This article is a big step towards this goal. Herein we describe five new species of Chiropterotriton and redescribed two more, based on molecular and morphological data, increasing considerably the known diversity of the genus. However, more work is still needed for the description of several more taxa when additional data are available.