ABSTRACT
The subgenus Mantidactylus is a group of frogs endemic to Madagascar, including the largest anuran species on the island. Although these frogs are common and widely distributed, their taxonomy remains unclear. Two species are currently recognised, M. grandidieri and M. guttulatus, with another available name, Rana pigra, considered to be a synonym of M. grandidieri. However, molecular studies have suggested the presence of several cryptic species within the group. Additionally, due to the lack of prominent morphological features, allocating the available names to evolutionary lineages has proven challenging. In the present study, we take a first step towards solving these problems by using fragments of the 16S mitochondrial gene and RAG1 nuclear gene from all over the range of the subgenus to describe its genetic diversity. We also use a newly designed target enrichment laboratory protocol to sequence three mitochondrial fragments from five name-holding museum specimens (as old as 120 years) in order to determine to which lineages the existing names should be applied. The study of the 16S mitochondrial gene revealed 7 geographically separated lineages, distinct enough to be considered candidate species. Out of the five museum specimens analysed, four successfully yielded DNA sequences and could be attributed to one of the aforementioned lineages. Therefore, the name Mantidactylus grandidieri should be applied to the populations from North-Eastern Madagascar, while M. guttulatus refers to populations from inland localities along the Eastern coast of the island. On the other hand, the holotype of Rana pigra did not yield enough genetic material to allow definitive identification. While our data were not sufficient to assess the status of the four lineages distributed along the Eastern coast, the populations from North-Western Madagascar were highly distinct on both the mitochondrial and nuclear markers. We thus describe them as a new species, Mantidactylus radaka sp. nov.

Etymology. The species name is a noun in apposition to the genus name, and is the Malagasy word for large frogs in general (as opposed to ‘sahona’, which usually refers to small frogs), and those of the subgenus Mantidactylus in particular. 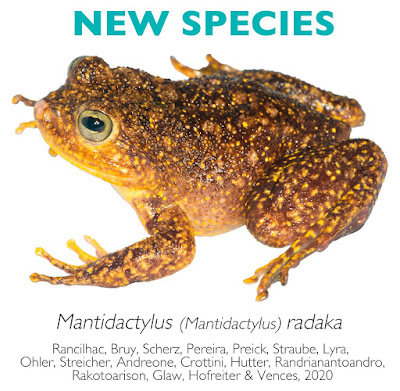 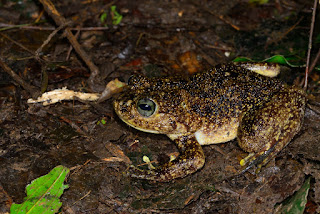 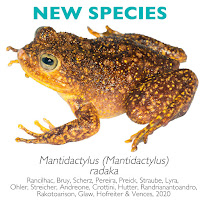 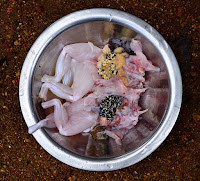