ABSTRACT
In this study, we report for the first time a hybridization between Caretta caretta and Chelonia mydas in South Korea. On 7th May 2012, a sea turtle (Jeju sea turtle 01, JST01) was found in the east coast of Jeju Island, South Korea. The morphological characteristics of JST01 were compared with those of C. caretta and C. mydas that were frequently observed in Korean Seas. Interestingly, JST01 showed similar morphological characters such as body color, appearance of carapace, shape of upper beak, serration on marginal scute, and two claws with those of C. caretta. On the other hand, JST01 showed also similar patterns in several characteristics including the numbers of marginal, inframarginal and costal scute, smooth carapace without keel, no contact between costal scute and nuchal scute with those of C. mydas. From these results, we suggest that JST01 is one of hybrid animals bred between C. caretta and C. mydas, because JST01 has species specific characters from both species. We anticipate that our study would be useful and have significant impact onto study inter-specific hybridization in the groups of sea turtle. 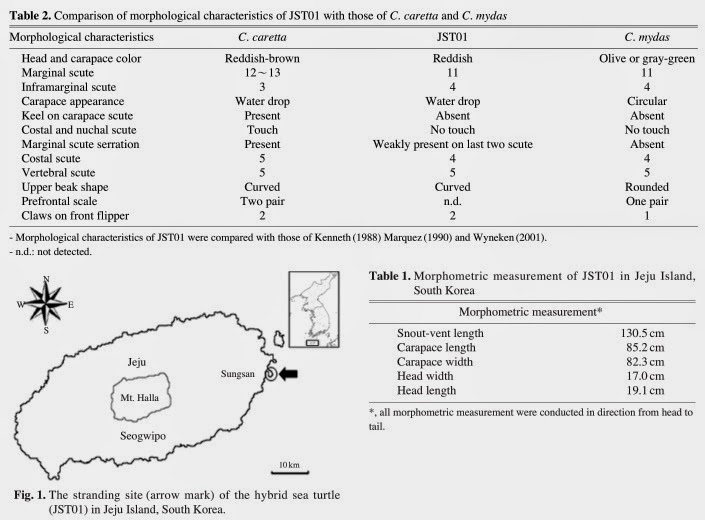 
The Green Turtle (Chelonia mydas) principally occupies tropical and subtropical waters, although juveniles are known to occur seasonally in temperate coastal waters. Collaboration with commercial fishers in eastern Canada yielded the most northerly records of this species in the northwest Atlantic. Here we report on the first confirmed record of a Green Turtle in eastern Canada and on the occurrence of a rare Green Turtle–Loggerhead Turtle (Caretta caretta) hybrid. Hybridization between the Carettini and Chelonini is extraordinary given that these groups have been genetically distinct for 50 million years or more.