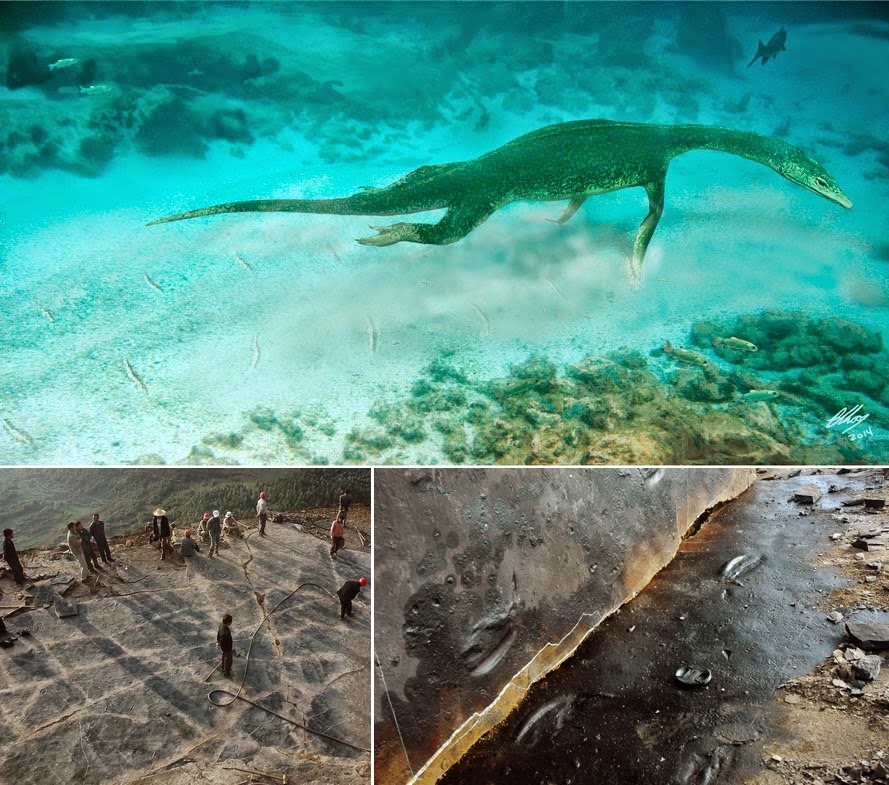 ABSTRACT
The seas of the Mesozoic (266–66 Myr ago) were remarkable for predatory marine reptiles, but their modes of locomotion have been debated. One problem has been the absence of tracks, although there is no reason to expect that swimmers would produce tracks. We report here seabed tracks made by Mesozoic marine reptiles, produced by the paddles of nothosaurs (Reptilia, Sauropterygia) in the Middle Triassic of the Luoping localities in Yunnan, southwestern China. These show that the track-making nothosaurs used their forelimbs for propulsion, they generally rowed (both forelimbs operating in unison rather than alternately), and the forelimb entered medially, dug in as the paddle tip gained purchase, and withdrew cleanly. These inferences may provide evidence for swimming modes, or it could be argued that the locomotory modes indicated by the tracks were restricted to such contact propulsion. Such punting behaviour may have been used to flush prey from the bottom muds.

Newly discovered paddle prints show how ancient sea reptiles swam
Trackways formed on an ancient seabed have shed new light on how nothosaurs, ancient marine reptiles that lived during the age of the dinosaurs, propelled themselves through water. The evidence is described by a team from Bristol and China in Nature Communications today.
http://www.bris.ac.uk/news/2014/june/paddle-prints.html
NH Notes: Discovery of a Marine Reptile Fossil Trackway