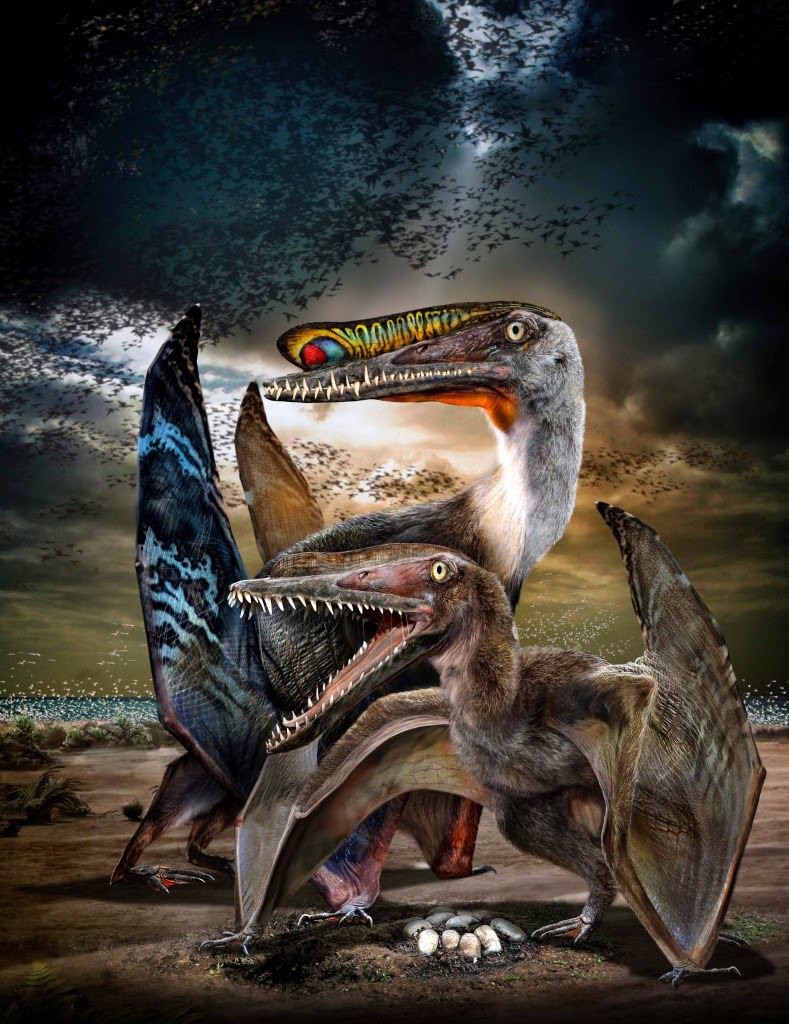 Highlights
• A population of a new pterosaur was discovered with 40 male and female individuals
• Sexually dimorphic morphologies differ in crest size, shape, and robustness
• Pliable eggs have a thin calcareous hard eggshell and a thick soft membrane layer
• The expansion of the rostrum is an ontogenetic character for the new species

Summary
Background
The pterosaur record is generally poor, with little information about their populations, and pterosaur eggs are even rarer, with only four isolated and flattened eggs found to date.

Results
We report here a population of a new sexually dimorphic pterosaur species (Hamipterus tianshanensis gen. et sp. nov.), with five exceptionally well-preserved three-dimensional eggs, from the Early Cretaceous deposit in northwestern China. About 40 male and female individuals in total were recovered, but the actual number associated might be in the hundreds. All of the discovered skulls have crests, which exhibit two different morphologies in size, shape, and robustness. The eggs show pliable depressions with cracking and crazing on the outer surface. The eggshell, observed by scanning electron microscopy and energy-dispersive spectroscopy, comprises a thin calcareous external hard shell followed by a soft membrane.

Conclusions
These fossils shed new light on the reproductive strategy, ontogeny, and behavior of pterosaurs. The cranial crests show sexually dimorphic morphologies, with presumed males and females differing in crest size, shape, and robustness. Ontogenetic variation is reflected mainly in the expansion of the rostrum. The eggs have some external rigidity of the general pliable eggshell, and the microstructure of the eggshell is similar to that of some modern “soft” snake eggs. We suggest that this new pterosaur nested in colonies and thus exhibited gregarious behavior, a possible general trend for at least derived pterodactyloid pterosaurs