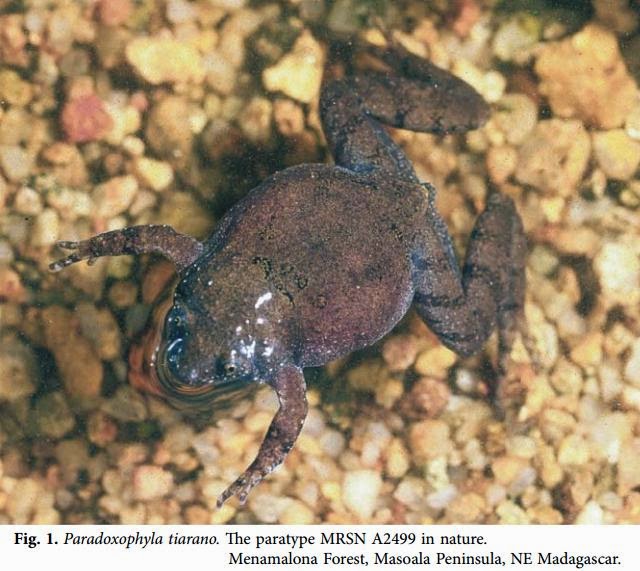 
Abstract
A new microhylid frog of the genus Paradoxophyla is described from the rainforests of northeastern Madagascar (Masoala). Paradoxophyla tiarano n. sp. was found in still waters within rainforest. In external morphology it is similar to P. palmata, hitherto the only known species belonging to this genus, but it differs by a much less extended foot webbing. We also provide a description of the probable tadpole of the species, which is a specialized suspension feeder of the typical microhylid type. The new species also differs from P. palmata in karyology and mitochondrial DNA sequences. Paradoxophyla tiarano n. sp. is currently known from Masoala, but we suspect that its distribution might extend over a wider area in northeastern Madagascar.
Key Words. Amphibia, Anura, Microhylidae, Paradoxophyla, New species, Madagascar

Etymology: The specific epithet “tiarano” (pronounced: tee-how-row-noo) is a Malagasy term composed by two words: “tia”, which means “love” and “to love,” “to like,” and “rano,” meaning “water.” The name means “that one loving the water,” and is used as a noun in apposition, underlining the aquatic habits of this frog.