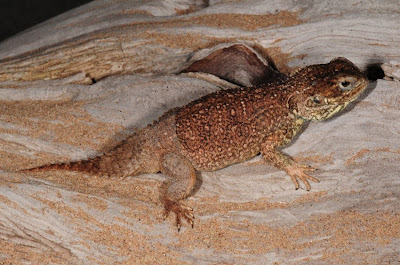 Abstract
Approximately 120 years after its description, this is the first thorough systematic review of the agamid genus Xenagama. Currently, the genus includes two extraordinary species, characterized by strongly discoidal tails. Both species are only known from a few localities in north-eastern Ethiopia and northern Somalia and are represented by a small number of specimens in museum collections. Morphological and mitochondrial (16S) DNA sequence data revealed that Xenagama batillifera is a complex of two cryptic species and the reassignment of Acanthocercus zonurus to the genus Xenagama is supported by morphological analyses. Herein, we describe specimens previously recognized as a geographic variant of X. batillifera as a new species and compare it to other whorl-tailed lizards of the genera Xenagama and Acanthocercus from the Horn of Africa, underscoring the significance of this poorly known but important region for agamid evolution. Among other features, the new species is characterized by possessing heterogeneous body scalation, no nuchal crest and no tufts of elongated scales around the ear. Similar to Xenagama batillifera or Xenagama taylori, and distinct to other African agamid lizards, the tail is shorter than the body and head, but the tail base is less discoidal than in X. batillifera or especially X. taylori and gradually merges into the terminal filament. The discoidal part of the tail is arranged in whorls with one scale ring each, whereas the filament is not distinctly whorled.

New Species of Lizard of the family Agamidae Discovered in Somalia http://www.reptilechannel.com/reptile-news/2013/04/16/new-species-of-agamidae-lizard-discovered-in-somalia.aspx