Abstract
A near-perfect mimetic association between a mecopteran insect species and a ginkgoalean plant species from the late Middle Jurassic of northeastern China recently has been discovered. The association stems from a case of mixed identity between a particular plant and an insect in the laboratory and the field. This confusion is explained as a case of leaf mimesis, wherein the appearance of the multilobed leaf of Yimaia capituliformis (the ginkgoalean model) was accurately replicated by the wings and abdomen of the cimbrophlebiid Juracimbrophlebia ginkgofolia (the hangingfly mimic). Our results suggest that hangingflies developed leaf mimesis either as an antipredator avoidance device or possibly as a predatory strategy to provide an antiherbivore function for its plant hosts, thus gaining mutual benefit for both the hangingfly and the ginkgo species. This documentation of mimesis is a rare occasion whereby exquisitely preserved, co-occurring fossils occupy a narrow spatiotemporal window that reveal likely reciprocal mechanisms which plants and insects provide mutual defensive support during their preangiospermous evolutionary histories. 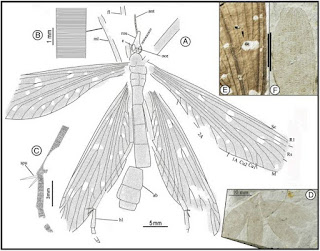 Insect mimic of ginko-like leaf discovered 165 million years after its extinction
A new species of hangingfly with wings that perfectly mimic the multi-lobed leaf of an ancient ginkgo-like tree has been discovered in China by scientists from the Smithsonian’s National Museum of Natural History and the University of Maryland, as well as the College of Life Sciences at Capital Normal University, in Beijing. Exquisitely preserved in fossil sediments dating from the Middle Jurassic, the insect, newly named Juracimbrophlebia ginkgofolia, was discovered in 165 million-year-old deposits, as was the ginko-like tree, Yimaia capituliformis, the mimicked plant.
http://smithsonianscience.org/ 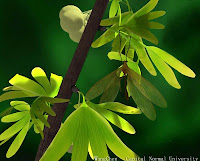