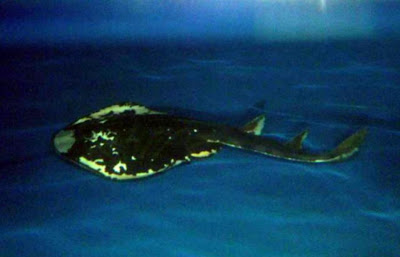 A ray of light thrown on 60-year-old mystery
http://www.sardi.sa.gov.au

The unexpected capture of a rare ray found only in a small region off South Australia could help marine scientists validate the existence of the elusive Magpie fiddler ray (Trygonorrhina melaleuca).

The species is listed by the International Union for Conservation of Nature (IUCN)  as Endangered, but until now its very existence has rested on a single specimen found nearly 60 years ago off Kangaroo Island. That specimen is stored at the South Australian Museum and was used to describe the magpie fiddler ray species in 1954.

“This ray, caught by fisher John Marsh from the Adelaide Game Fishing’ Club, is pretty much considered the ‘Holy Grail’ specimen,” says Paul Rogers, a researcher with SARDI Aquatic Sciences Threatened, Endangered and Protected Species program. “This is because the species has been described based on one specimen only and up until now, scientists have not been able to study another specimen of the magpie fiddler ray.”

Dr Charlie Huveneers, who is also a researcher with the SARDI TEPS program, says that the ray was caught by alert fishers in Port River on Saturday, April 6, who recognised the significance of the specimen.

“It was a very lucky coincidence that the fishers who caught the ray also have a good collaborative relationship with SARDI, sometimes helping researchers to catch and tag fish and sharks. They were aware that the SA Museum was keen to find such a specimen, and so were very careful capturing and landing the ray."

The healthy ray with its startling brown, black and white colouring is similar to the markings on a magpie, is thought to be of mature age, is around 1.10 metres in length, and may even be pregnant.

“The SA Museum has been trying to collect samples from this species for many years and it’s considered to be a very valuable live specimen,” Dr Rogers said. “It could be carrying pups which would be also be highly valuable from a genetic and morphological perspective”

Dr Rogers and Dr Huveneers will send tissue samples from the ray to other research organisations, including the South Australian Museum and CSIRO, Hobart. Dr Gavin Naylor, a biologist at the College of Charleston in South Carolina is also very interested in sourcing samples of this rare live specimen for the global Elasmobranch tree of life project.

“We plan to keep the ray at SARDI for as long as it takes to glean as much information as we can before releasing it back into the wild,” he said. “We aim to help several genetic labs to collect vital information to unravel whether it is a mutant form of the southern fiddler ray (T. dumerilii) or a distinct species as was first thought when it was first discovered almost 60 years ago.”

The ray is believed to be endemic to the Gulf St Vincent and waters around Kangaroo Island. For now it is swimming happily around in a large tank at the SARDI Aquatic Sciences pool farm. 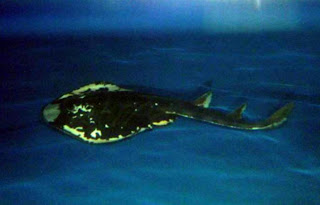 A ray of light thrown on 60-year-old mystery http://www.sardi.sa.gov.au/information_and_news/2013_media_releases/a_ray_of_light_thrown_on_60-year-old_mystery