[Entomology • 2013] A new genus and species of fairyfly, Tinkerbella nana (Hymenoptera, Mymaridae) from Costa Rica, with comments on its sister genus Kikiki, and discussion on small size limits in arthropods 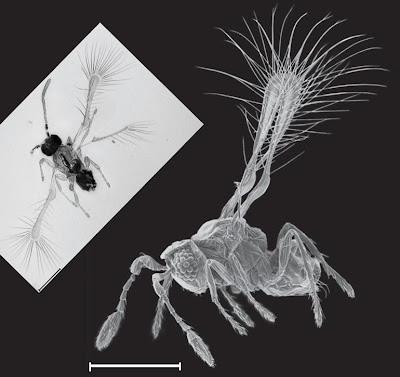 Abstract
A new genus and species of fairyfly, Tinkerbella nana (Hymenoptera: Mymaridae) gen. n. and sp. n., is described from Costa Rica. It is compared with the related genus Kikiki Huber and Beardsley from the Hawaiian Islands, Costa Rica and Trinidad. A specimen of Kikiki huna Huber measured 158 µm long, thus holding the record for the smallest winged insect. The smallest size possible, as measured by body length, for flying insects and wingless arthropods is discussed. 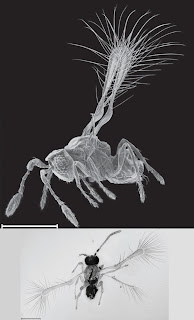 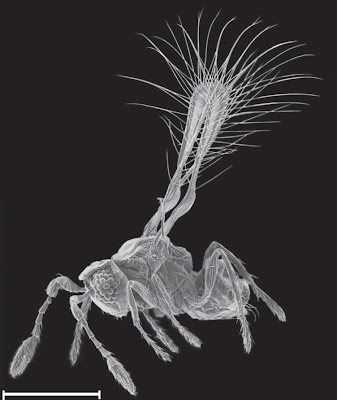 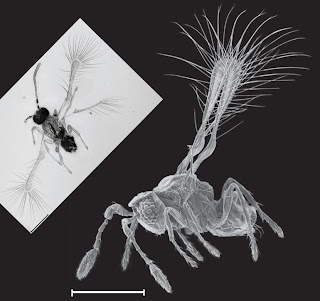 A new species of tiny fly named after the fairy in "Peter Pan" is mind-blowingly miniscule, with delicate wings trimmed in fringe.
Tinkerbella nana is a newly discovered species of fairyfly from Costa Rica. Fairyflies are a type of chalcid wasp, and almost all are parasites, living on the eggs and larvae of other insects. It's a gruesome way to live, but it makes fairyflies useful for farmers, who sometimes import them to control nasty pests.
........................

Huber JT, Beardsley JW (2000b) A new genus of fairyfly, Kikiki, from the Hawaiian Islands (Hymenoptera: Mymaridae). Proceedings of the Hawaiian Entomological Society 34: 65–70.