Rusty-throated Wren Babbler Spelaeornis badeigularis was described by Ripley (1948) from a netted specimen collected on 5 January 1947 at about 1,600 m near Dreyi (near or now possibly known as Lohitpur/Lohatipur) in the Lohit River drainage of the Mishmi Hills, in what is now Arunachal Pradesh state, north-east India, at c.28°0′N 96°17′E. The species was not encountered again in the twentieth century, no doubt due to the inaccessibility of the Mishmi Hills, an area that even Indian citizens need a permit to visit. However, in the late 1990s the permit requirements were relaxed so that foreigners could visit.
.............. 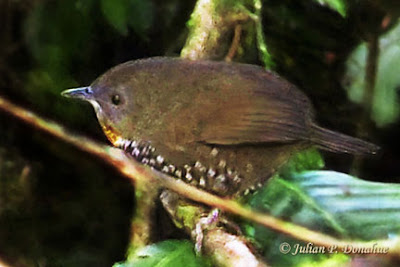