Abstract
The northern part of Madagascar is well known for its high species diversity and endemism. Exceptional species richness is related to the existence of large forest blocks and mountain complexes. These areas shelter a diverse variety of habitats occupied by a wide diversity of species, including leaf-tailed geckos of the genus Uroplatus. Based on morphological and molecular evidence, we here formally name two evolutionary lineages as new species that previously had been considered as candidate species (Uroplatus spp. Ca3 and Ca4), both small-sized species of the Uroplatus ebenaui group. Genetically, both new species are related to U. finiavana with a genetic divergence (uncorrected pairwise distance) of 10.3–12.8% in a fragment of the mitochondrial 16S rRNA gene, and separated from each other by 10.3–10.7%. Uroplatus fangorn sp. nov. is described from the Marojejy massif and is also known from Andrevorevo, Lohanandroranga and Sorata; it is similar to U. ebenaui and U. fetsy but is distinguishable by its rather short tail and only partially black pigmented oral mucosa. Uroplatus fivehy sp. nov. is described from the Sorata Massif and is wider-ranging, occurring in an area from Marotandrano and Makira to Sorata, comprising Marojejy, Anjanaharibe-Sud, Ankitsika and Betaolana; it is morphologically similar to U. finiavana but distinguishable by tail size and shape. Both newly described species are found in rainforest from mid to high elevation and range respectively from 840–1417 m for U. fivehy sp nov. and 1300–1800 m for U. fangorn sp. nov. According to their respective geographical distributions, we propose to classify the two new species as Vulnerable under the IUCN Red List criteria, due to their occurrence in some forests outside of the protected area network plus the continuing decline of forest patches in the north of Madagascar.
Keywords: Reptilia, Squamata, Gekkonidae, Uroplatus fangorn sp. nov., Uroplatus fivehy sp. nov. 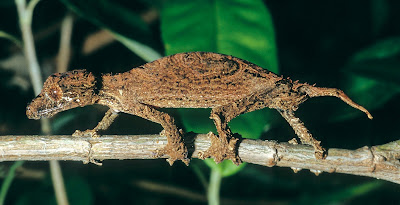