Abstract
The crocodylian fossil record from the Cenozoic of Australasia is notable for its rich taxonomic diversity, and is primarily represented by members of the clade Mekosuchinae. Reports of crocodylian fossils from Australia date back to the late nineteenth century. In 1886, Charles Walter de Vis proposed the name Pallimnarchus pollens for crocodylian fossils from southeast Queensland—the first binomen given to an extinct crocodylian taxon from Australia. Pallimnarchus has come to be regarded as a large, broad-snouted crocodylian from Australia’s Plio-Pleistocene, and numerous specimens, few of which are sufficiently complete, have been assigned to it by several authors throughout the twentieth century. In the late 1990s, the genus was expanded to include a second species, Pallimnarchus gracilis. Unfortunately, the original syntype series described as Pallimnarchus pollens is very fragmentary and derives from more than one taxon, while a large part of the subsequently selected lectotype specimen is missing. Because descriptions and illustrations of the complete lectotype do not reveal any autapomorphic features, we propose that Pallimnarchus pollens should be regarded as a nomen dubium. Following this decision, the fossil material previously referred to Pallimnarchus is of uncertain taxonomic placement. A partial skull, formerly assigned to Pallimnarchus pollens and known as ‘Geoff Vincent’s specimen’, possesses many features of diagnostic value and is therefore used as basis to erect a new genus and species—Paludirex vincenti gen. et sp. nov. A comprehensive description is given for the osteology of ‘Geoff Vincent’s specimen’ as well as aspects of its palaeoneurology, the latter being a first for an extinct Australian crocodyliform. The newly named genus is characterized by a unique combination of premaxillary features such as a distinctive arching of the anterior alveolar processes of the premaxillae, a peculiar arrangement of the first two premaxillary alveoli and a large size disparity between the 3rd and 4th premaxillary alveoli. These features presently allow formal recognition of two species within the genus, Paludirex vincenti and Paludirex gracilis comb. nov., with the former having comparatively more robust rostral proportions than the latter. The Paludirex vincenti holotype comes from the Pliocene Chinchilla Sand of the Darling Downs, south-eastern Queensland, whereas the material assigned to Paludirex gracilis is from the Pleistocene of Terrace Site Local Fauna, Riversleigh, northwest Queensland. Phylogenetic analyses recover Paludirex vincenti as a mekosuchine, although further cladistic assessments are needed to better understand the relationships within the clade. 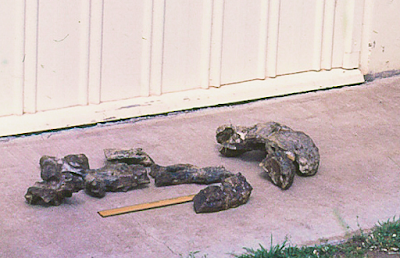 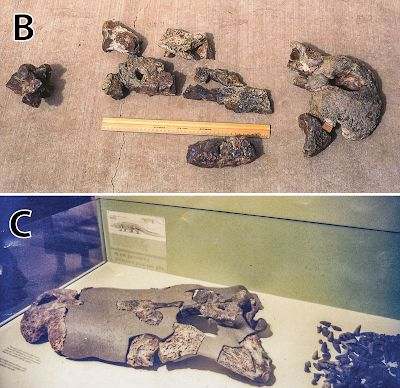 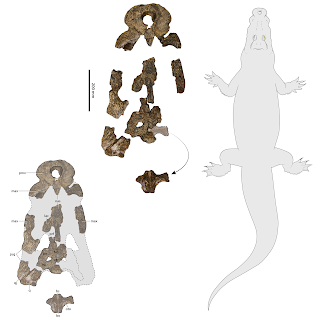 Conclusions:
Pallimnarchus pollens is herein regarded a nomen dubium since its designated lectotype specimen is almost completely missing and, based on its published descriptions and illustrations, deemed to be non-diagnostic. Following this verdict, the majority of fossil specimens formerly assigned to Pallimnarchus are temporarily of undetermined generic and specific placement. Only a handful of the examined specimens previously referred to Pallimnarchus were sufficiently preserved to allow the establishment of a new crocodylian genus, Paludirex. As currently understood, the genus Paludirex consists of two large-bodied (Fig. 39) and broad-snouted species – P. gracilis and P. vincenti. Both Paludirex species were presumably semi-aquatic ambush predators likely capable of taking large-sized prey items, as can be inferred from the skull morphology which is largely consistent with that of extant semi-aquatic generalist crocodylians (such as a primarily dorsally opening external narial fenestra, a platyrostral snout, and large and conical teeth). The type species, P. vincenti, has a better understood morphology than P. gracilis thanks to its more complete holotype specimen. As a consequence, the diagnosis of the genus and differentiation between the two species must temporarily rely on the only shared elements between P. gracilis and P. vincenti, which are the premaxillae. The proportional differences between the premaxillae of P. gracilis and P. vincenti are appropriate to justify the specific distinction between them. Paludirex vincenti derives from Pliocene (and perhaps Pleistocene) deposits in southeast Queensland, whilst the P. gracilis material is from the Pleistocene of northwest Queensland. However, discovery of additional specimens referable to Paludirex may change the known spatiotemporal distribution of these two species. Species of Paludirex were one of the top predators from the Plio-Pleistocene of Australia, and their extinction is likely a consequence of environmental deterioration prompted by climatic changes that occurred in the late Pleistocene.
Jorgo Ristevski, Adam M. Yates, Gilbert J. Price, Ralph E. Molnar, Vera Weisbecker and Steven W. Salisbury. 2020. Australia’s Prehistoric ‘Swamp King’: Revision of the Plio-Pleistocene Crocodylian Genus Pallimnarchus de Vis, 1886. PeerJ. 8:e10466. DOI: 10.7717/peerj.10466
Crikey! Massive prehistoric croc emerges from South East Queensland
uq.edu.au/news/node/127950
phys.org/news/2020-12-crikey-massive-prehistoric-croc-emerges.html