Abstract
Achalinus, commonly known as odd-scaled snakes due to their unique scutellation, are a fascinating group of xenodermid snakes distributed throughout east Asia. Currently, northern Vietnam is known to host six species of Achalinus, three of which are considered endemic. During recent herpetofaunal surveys conducted in the Bac Me District of Ha Giang Province, we collected a single specimen of Achalinus in a lowland region surrounded by secondary forest on karst. We conducted Bayesian and maximum likelihood phylogenetic analyses using multiple mitochondrial protein-coding loci and a ribosomal subunit to ascertain the phylogenetic position of the Ha Giang specimen among currently recognized odd-scaled snake species. The results of those analyses along with morphological differences support this specimen as representing a new species, which we describe as Achalinus zugorum, new species. We provide detailed morphological descriptions and comparisons of the new species as well as brief comments on the biogeography and conservation of Achalinus in northern Vietnam. 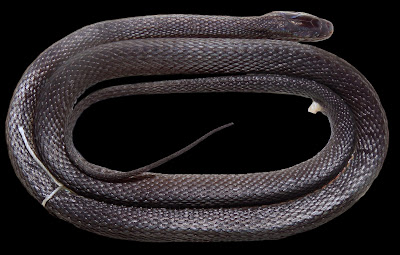 Achalinus zugorum, new species
Vietnamese Common Name: Rắn xe điếu zug
English Common Name: Zugs' Odd-Scaled Snake
Diagnosis.— Achalinus zugorum differs from all other species of Achalinus by the following combination of morphological characteristics (Supplementary Table 1; see Data Accessibility): dorsal scales elliptical; one dorsal scale directly above each ventral scale; absence of everted labial scales; preocular absent (fused with prefrontal or loreal scale); maxillary teeth 28, all teeth curved and equal in size; internasal suture distinctly longer than that between the prefrontal suture; internasals not fused to prefrontals; loreal fused with prefrontals; seven infralabials; mental very narrow, separated from anterior chin shields; two elongated anterior temporals, in contact with eye, and two posterior temporals; dorsal scales in 25–23–23 rows, keeled; ventrals 173; subcaudals 70, unpaired; a maximum known total length of 458 mm, TailL/TotalL ratio of 0.23; dorsum purple to jet black in life and in preservative, lower and posterior portions of head pink-gray, ventral surface iridescent and uniform black with margins of ventral scales pink-gray.
Etymology.— The specific epithet, a plural noun in the genitive case, honors George R. Zug and Patricia B. Zug. George is commemorated for his contributions to herpetology (reviewed by Mitchell, 2018), especially within Southeast Asia, and for his mentorship to two of the authors (AHM, JLL) and many young scientists before them. We also celebrate Patricia for her contributions to herpetology, as well as her ever endearing and compassionate spirit which continues to inspire the authors.
Distribution and natural history.— The holotype of Achalinus zugorum was collected on a small gravel road running through Lùng Càng Village, Minh Ngo. c Commune, Bac Me District, Ha Giang Province, Vietnam at an elevation of 228 meters above sea level. So far, the species is known only from the type locality and no specimens have been collected since its discovery. Nothing is known about the ecology, behavior, diet, or preferred microhabitat of this species, though it is presumably a semi-fossorial species that was drawn out by recent heavy rainfall prior to collection. The habitat surrounding its collection location consisted primarily of secondary forest with medium to small hardwoods on karst. The mean annual temperature in Ha Giang Province is 23.3°C, with a dry season typically extending from October to March and the rainy season lasting April until September (Le et al., 2007). 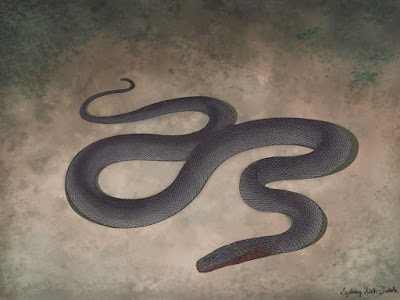 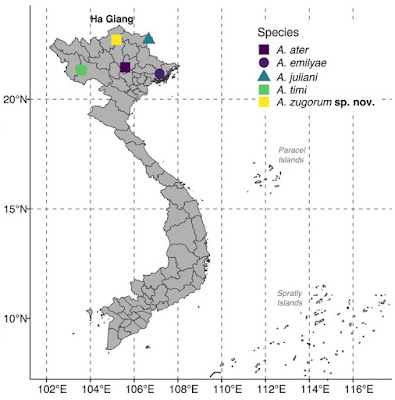 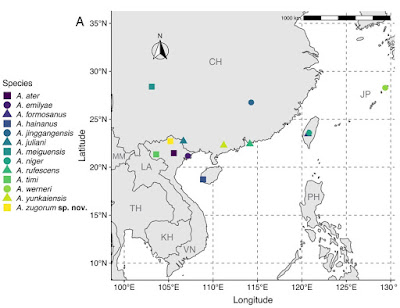 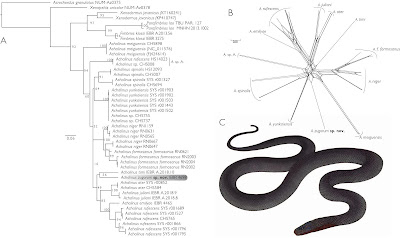 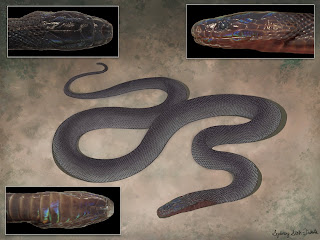 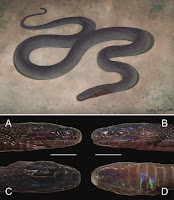