Abstract
Members of the genus Sphaerotheca are known to have the distribution in the low to mid elevation landscapes of South Asia. Most of the descriptions are either from homestead areas or from agro ecosystems except for a couple of species described from the mid elevated forest areas. The taxonomic uncertainties prevalent in the group was attended very recently, limiting the descriptions of five species to India, two species to Nepal and one each to Pakistan and Sri Lanka (one undescribed species from Myanmar). Here a new species assignable to the morphological 'Breviceps group' is described from the agro ecosystems of Jharkhand based on a combination of morphological, phylogenetic and geographical studies using integrated taxonomic approach. Besides, the distribution status of Sphaerotheca pashchima is discussed and the possibility of a new species occurring in Myanmar is pointed out. 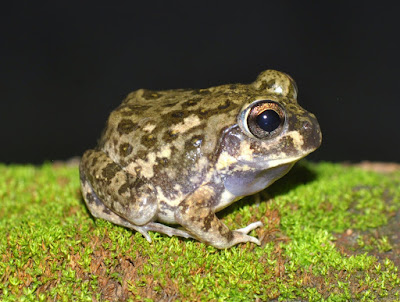 Field Diagnosis:
Morphology: In the field, Sphaerotheca magadha sp. nov. does not have any morphologically similar congeneric sympatric species, and it can be easily identified on the basis of the combination of morphological characters like medium size, stumpy and squat body, wider head width than head length, rounded snout, angled canthus rostralis, first finger longer than the second (and sub equal to third finger), short hind limbs which do not touch when folded at right angles to the body, tibiotarsal articulation reaching front of shoulders, moderate webbing, distinct shovel shaped inner metatarsal tubercle and a prominent tarsal tubercle. For comparisons of the new species Sphaerotheca magadha sp. nov. with its phylogenetic sister species Sphaerotheca breviceps and its congeners, see section below.

Etymology The specific epithet is derived from the term ‘Magadha’, an ancient kingdom located on the Indo-Gangetic plains in the eastern Indian state Jharkhand. Suggested common name: ‘Magadha burrowing frog’ species epithet is treated as noun in apposition to generic name.

Distribution and Natural history Sphaerotheca magadha sp. nov. is known specifically from Joungi and Nawadih village of Koderma district of Jharkhand in Chota Nagpur Plateau. Chota Nagpur Plateau is having geological significance in terms of the continental drift theory (Mani, 1974; Ghosh et al., 2015). We found this species to be common locally on the road side muddy puddles and it was observed calling and breeding during pre-monsoon showers of June.