ABSTRACT
A new subterranean and troglomorphic species of Ituglanis Costa and Bockmann, 1993 is described from the carbonatic karst area of northeastern Goiás state, upper Tocantins River Basin, central Brazil, representing the sixth subterranean species of the genus described from the same region. Ituglanis boticario sp. nov. is diagnosed by a combination of unusual characters for the genus: body pigmentation forming longitudinal stripes, 7-8 pairs of ribs, presence of the anterior segment of the infraorbital laterosensory canal, and usually 8 pectoral-fin rays. Due to the absence of epigean populations and the presence of some degree of morphological specialization to the subterranean environment, it can be classified as a troglobite (i.e., exclusively subterranean). The description of this species increases the importance of the northeastern Goiás region as a biodiversity spot for subterranean ichthyofauna, mainly Ituglanis. The region demands urgent political efforts to ensure the preservation of its speleobiological patrimony, including the Tarimba cave system, one of the largest caves in Brazil and type-locality of I. boticario sp. nov.

Distribution. Ituglanis boticario sp. nov. is known only from subterranean streams on the Mambaí karst area, belonging to the Rio Vermelho sub-basin, a tributary of Rio Paranã, upper Tocantins River Basin, on the northeastern region of Goiás state. Its presence was reported for at least two cave systems on the Mambaí municipality region (from north to south): the Tarimba cave system and the Nova Esperança cave system.

Etymology. The specific epithet – boticario – is in honor of Fundação O Boticário de Proteção à Natureza (FBPN) which financially supported a project for effective protection of Tarimba cave system, including the proposition of a Conservation Unit at Goiás State. A noun in apposition. 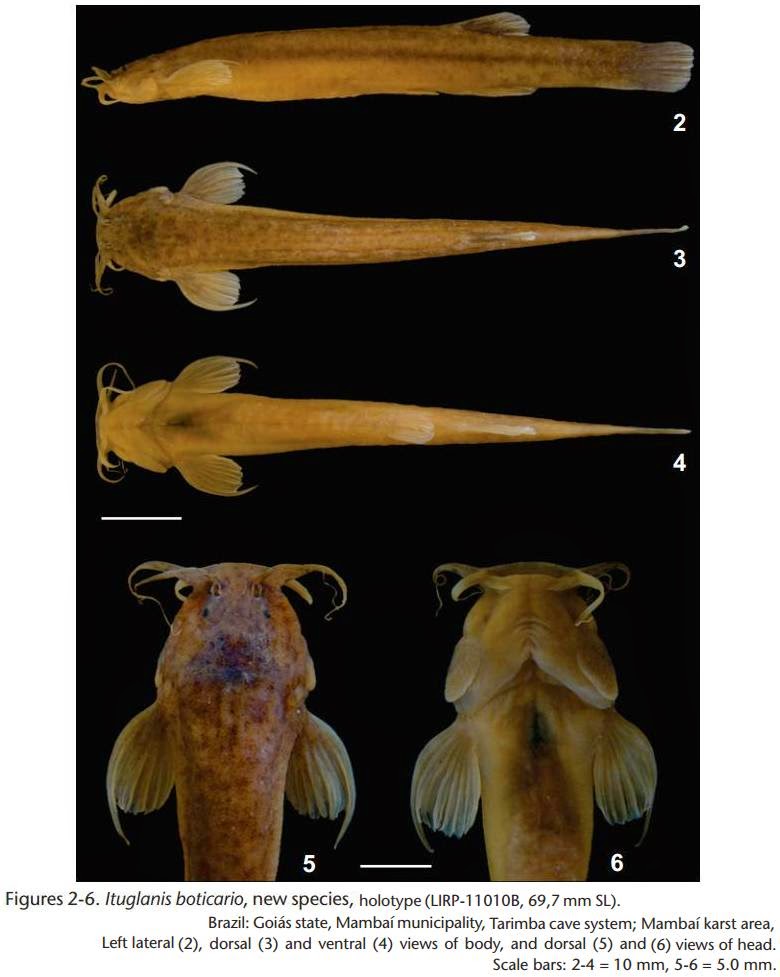