The genus Sitana was described by Cuvier (1829) on the basis of a single species, S. ponticeriana. The secondly described, Sitana minor Günther, 1864, is identical to S. ponticeriana Cuvier, 1829, and should be considered as a junior objective synonym of the latter. The syntypes of S. deccanensis Jerdon, 1870 have been rediscovered, misplaced among the syntypes of S. minor (sensu Boulenger 1885) at the Natural History Museum (London) and the former taxon is here recognised as a valid species and redescribed. There is some doubt surrounding the taxon Sitana ponticeriana mucronata Deraniyagala, 1957. Its type is lost and no live populations have been found since its original description; therefore, we here consider this trinomen as a nomen dubium. The Sitana populations which are distributed in drier and warmer areas of the lower peneplain of Sri Lanka are sufficiently different from the known Indian species and are thus herein described as new species. The two new species, Sitana bahiri sp. nov. and Sitana devakai sp. nov., differ from mainland Indian congeners by having the following combination of characters: SVL 40.0–50.0 mm; axilla-dewlap length 28.3–32.5% of axilla-groin length; snout length 54.7–63.2% of head width; femur length 70.6–78.4% of tibia length; foot length 154.7–180.2% of head length; 49–59 midbody scales; 87–108 ventral scales; unequal and irregular lateral scales with intermediate enlarged scales; 7–9 supralabials; 14–17 subdigital lamellae on toe III; 21–26 subdigital lamellae on toe IV; enlarged scales above the tympanum; a single pale stripe from the snout up to the shoulder. Sitana bahiri sp. nov. differs from Sitana devakai sp. nov. by having ventrals 87–89 (vs. 100–108), mucronate lateral scales (vs. rounded) in males, and rounded (vs. mucronate) ventral scales in females, plus several other characters discussed later . The remaining Sitana populations in India seem to represent several undescribed species, but extensive field work and molecular studies are needed in order to obtain better knowledge. We believe this study, which provides descriptions for all the recognised Indian species, will go some way in stabilizing the nomenclature for this group of common agamid lizards. 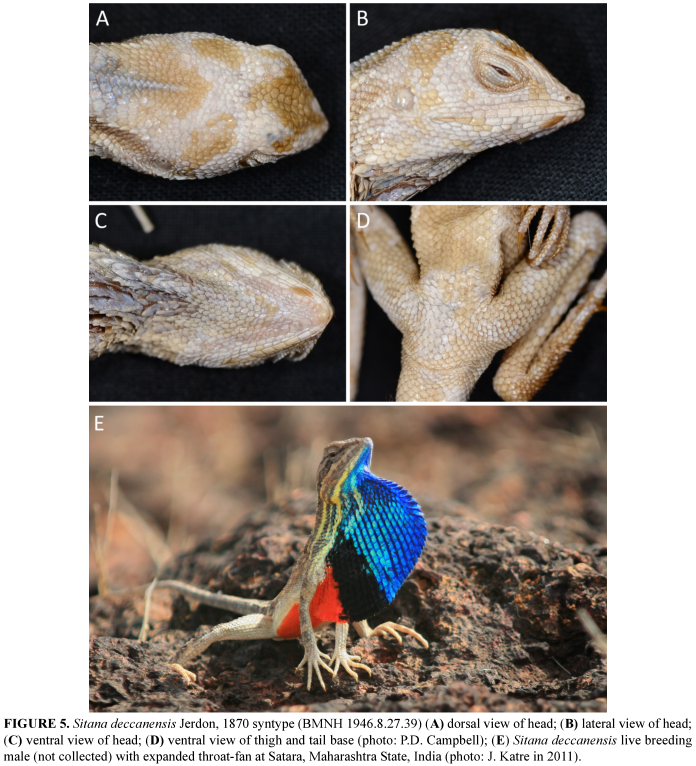