[Ichthyology • 2014] Porophryne erythrodactylus • A New Genus and Species of the Frogfish Family Antennariidae (Lophiiformes: Antennarioidei) from New South Wales, Australia, with a Diagnosis and Key to the Genera of the Histiophryninae

A new genus and species of the frogfish family Antennariidae, subfamily Histiophryninae, is described on the basis of three specimens collected near Kurnell and Bare Island in Botany Bay, New South Wales, Australia. It differs from all other antennariid genera in having a combination of features that includes a unique morphology of the first and second dorsal-fin spines, some or all fins fringed with red, and a unique combination of fin-ray and vertebral counts. The new genus is diagnosed, described, and compared to its sister genus, Kuiterichthys, using both molecular and morphological data. Notes on habitat and sponge mimicry, locomotion and defense, and reproduction and parental care are also provided as well as a diagnosis and a revised key to the known genera of the Histiophryninae. 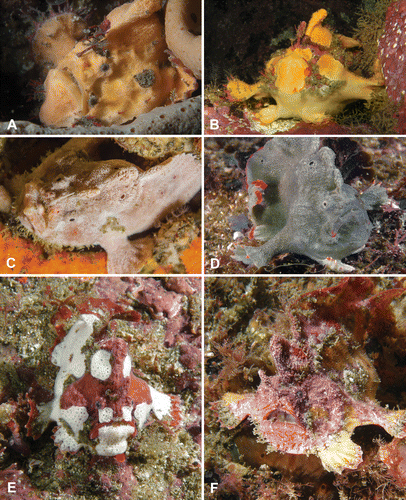