[Paleontology • 2014] Origin of the Unique Ventilatory Apparatus of Turtles 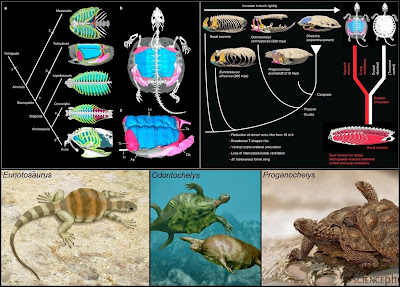 The turtle body plan differs markedly from that of other vertebrates and serves as a model system for studying structural and developmental evolution. Incorporation of the ribs into the turtle shell negates the costal movements that effect lung ventilation in other air-breathing amniotes. Instead, turtles have a unique abdominal-muscle-based ventilatory apparatus whose evolutionary origins have remained mysterious. Here we show through broadly comparative anatomical and histological analyses that an early member of the turtle stem lineage has several turtle-specific ventilation characters: rigid ribcage, inferred loss of intercostal muscles and osteological correlates of the primary expiratory muscle. Our results suggest that the ventilation mechanism of turtles evolved through a division of labour between the ribs and muscles of the trunk in which the abdominal muscles took on the primary ventilatory function, whereas the broadened ribs became the primary means of stabilizing the trunk. These changes occurred approximately 50 million years before the evolution of the fully ossified shell.