Abstract
The black-spotted tokay and the red-spotted tokay are morphologically distinct and have largely allopatric distributions. The black-spotted tokay is characterized by a small body size and dark skin with sundry spots, while the red-spotted tokay has a relatively large body size and red spots. Based on morphological, karyotypic, genetic, and distribution differences, recent studies suggested their species status; however, their classifications remain controversial, and additional data such as ecological niches are necessary to establish firm hypotheses regarding their taxonomic status. We reconstructed their ecological niches models using climatic and geographic data. We then performed niche similarity tests (niche identity and background tests) and point-based analyses to explore whether ecological differentiation has occurred, and whether such differences are sufficient to explain the maintenance of their separate segments of environmental ranges. We found that both niche models of the black- and the red-spotted tokay had a good fit and a robust performance, as indicated by the high area under the curve (AUC) values (“black” = 0.982, SD = ± 0.002, “red” = 0.966 ± 0.02). Significant ecological differentiation across the entire geographic range was found, indicating that the involvement of ecological differentiation is important for species differentiation. Divergence along the environmental axes is highly associated with climatic conditions, with isothermality being important for the “black” form, while temperature seasonality, precipitation of warmest quarter, and annual temperature range together being important for the “red” form. These factors are likely important factors in niche differentiation between the two forms, which result in morphological replacement. Overall, beside morphological and genetic differentiation information, our results contribute to additional insights into taxonomic distinction and niche differentiation between the black- and the red-spotted tokay. 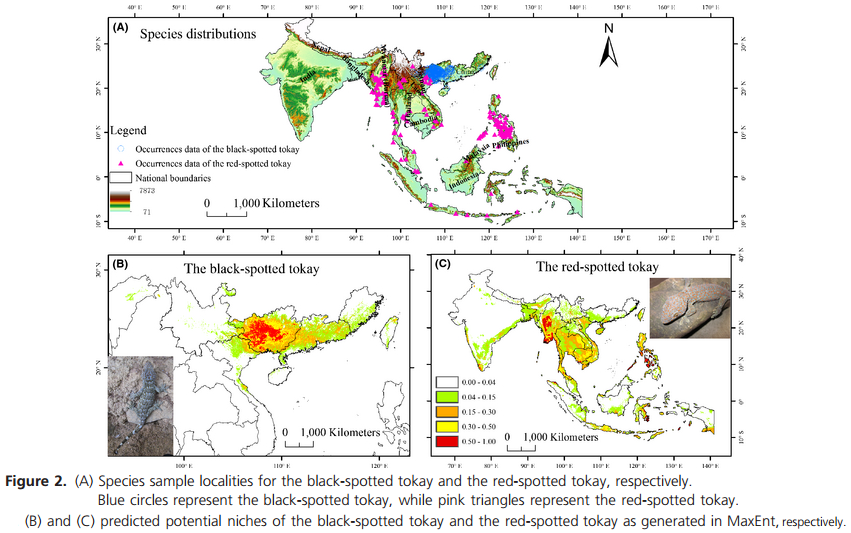 Conclusions
To conclude, our results revealed that niche differentiation between the black- and red-spotted tokay was significantly detected. Such ecological niche divergence occurring in allopatry has often been inferred to, or at least in line with, the ecological speciation hypothesis (Schluter 2000; Rundle and Nosil 2005; Wellenreuther et al. 2012). Our results imply that it is important to quantify niche differences across geographic scales, aiding to define cryptic species. In other words, our results further supported taxonomic suggestions of Rösler et al. (2011), that is, the “black” form and “red” form were taxonomically distinct, which the “red” form is G. g. gecko, while the “black” form is regarded as G. reevesii. Our results also suggested that divergence in physiological temperature and precipitation was the most likely factors that can explain their different distributions. It could be a major driver of the range limits and niche divergence across the entire range. However, caution should be taken to infer the niche divergence, and more mechanistic and experimental studies of individuals are required in the field or in the laboratory (e.g., comprehensive geographic sampling and a functional characterization of differences in resource use; Losos 2000; Wellenreuther et al. 2012).