Edentistoma octosulcatum Tömösváry, 1882, is a rare, superficially millipede-like centipede known only from Borneo and the Philippines. It is unique within the order Scolopendromorpha for its slow gait, robust tergites, and highly modified gizzard and mandible morphology. Not much is known about the biology of the species but it has been speculated to be arboreal with a possibly vegetarian diet. Until now its phylogenetic position within the subfamily Otostigminae has been based only on morphological characters, being variably ranked as a monotypic tribe (Arrhabdotini) or classified with the Southeast Asian genus Sterropristes Attems, 1934. The first molecular data for E. octosulcatum sourced from a newly collected specimen from Sarawak were analysed with and without morphology. Parsimony analysis of 122 morphological characters together with two nuclear and two mitochondrial loci resolves Edentistoma as sister group to three Indo-Australian species of Rhysida, this clade in turn grouping with Ethmostigmus, whereas maximum likelihood and parsimony analyses of the molecular data on their own ally Edentistoma with species of Otostigmus. A position of Edentistoma within Otostigmini (rather than being its sister group as predicted by the Arrhabdotini hypothesis) is consistently retrieved under different analytical conditions, but support values within the subfamily remain low for most nodes. The species exhibits strong pushing behaviour, suggestive of burrowing habits. Evidence against a suggested vegetarian diet is provided by observation of E. octosulcatum feeding on millipedes in the genus Trachelomegalus. 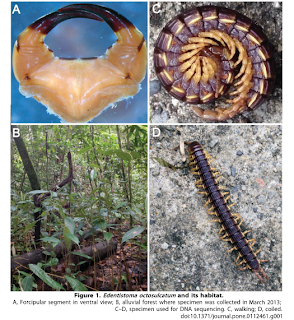