ABSTRACT
An integrative taxonomic analysis of three newly discovered populations of the gekkonid genus Cyrtodactylus Gray from Merapoh, Pahang; Gunung Stong, Kelantan; and Gunung Tebu, Terengganu indicate they are part of the C. pulchellus complex and each is a new species and thusly named Cyrtodactylus sharkari sp. nov., C. jelawangensis sp. nov., and C. timur sp. nov., respectively. Each species bears a unique suite of morphological and color pattern characters separating them from each other and all other nominal species in the C. pulchellus complex. Their phylogenetic relationships to each other and other species in the C. pulchellus complex were unexpected in that they are not in accordance with the general distribution of the species in this complex, underscoring the intricate historical biogeography of the Thai-Malay Peninsula. These descriptions highlight our current lack of knowledge concerning the herpetological diversity and distribution of species in northeastern Peninsular Malaysia.

Distribution. This species is known only from the type locality at Gua Gunting, Merapoh, Pahang, Peninsular Malaysia (Fig. 1). It is expected that its distribution is more extensive throughout the limestone forest of this region.

Etymology. The specific epithet sharkari is a patronym honoring Dato Mohd. Sharkar Shamsudin Chairman of the Pahang State Tourism and Culture Committee for his persistence in ensuring the cancellation of the proposed cement plant in Merapoh.

Natural History. The holotype was collected at 2100 hrs approximately 2 m above the ground on a vertical surface of the perimeter of an extensive karst system surrounded by a limestone forest (Fig. 3). 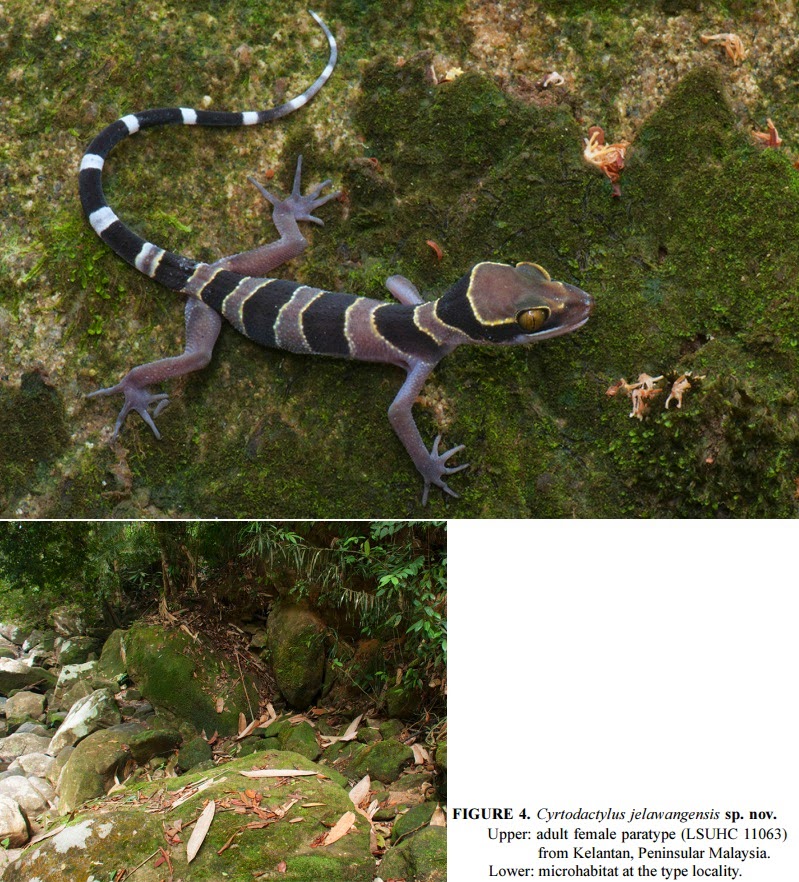 Distribution. Cyrtodactylus jelawangensis sp. nov. is known only from the type locality at Kem Baha, Gunung Stong, Kelantan, Peninsular Malaysia (Fig. 1). It is expected that its distribution is more extensive throughout Gunung Stong both above and below the type locality. Norhayati et al. (2005) recorded a specimen that was identified as C. pulchellus from around a stream near the Pergau River in the Gunung Basor Forest Reserve, Kelantan. Due to the close proximity of the location to Gunung Stong, we believe those specimens were incorrectly identified and should be assigned to this new species.

Etymology. The specific epithet jelawangensis is an adjective in reference to Hutan Lipur Jelawang, the recreational forest at the base of Gunung Stong near the type locality.

Natural History. Cyrtodactylus jelawangensis sp. nov. was collected at night along a fast-flowing stream strewn with granite boulders coursing through hill dipterocarp forest (Fig. 4) between 455 m and 470 m in elevation. Lizards were most common on large granite boulders in areas where they could easily escape into a nearby crack or between boulders. Others were seen on roots beneath an earthen overhang and one specimen was found on a tree trunk

Distribution. This species may be endemic to Gunung Tebu, Terengganu, Peninsular Malaysia. It is expected that its distribution is more extensive both above and below the type locality at Punca Air.

Natural History. All adults were collected at night in hill dipterocarp forest in the vicinity of a rocky stream (Fig. 6) between 640 m and 700 m in elevation. Lizards were most common on the granite boulders along the stream but others were seen on the bases of trees and one individual was observed on an earthen bank. A small juvenile (LSUHC 10886, SVL 60.3 mm) was found on a twig at the base of a large tree deep in the forest and not along the stream.