ABSTRACT
Only seven types of mammals are known to be venomous, including slow lorises (Nycticebus spp.). Despite the evolutionary significance of this unique adaptation amongst Nycticebus, the structure and function of slow loris venom is only just beginning to be understood. Here we review what is known about the chemical structure of slow loris venom. Research on a handful of captive samples from three of eight slow loris species reveals that the protein within slow loris venom resembles the disulphide-bridged heterodimeric structure of Fel-d1, more commonly known as cat allergen. In a comparison of N. pygmaeus and N. coucang, 212 and 68 compounds were found, respectively. Venom is activated by combining the oil from the brachial arm gland with saliva, and can cause death in small mammals and anaphylactic shock and death in humans. We examine four hypotheses for the function of slow loris venom. The least evidence is found for the hypothesis that loris venom evolved to kill prey. Although the venom's primary function in nature seems to be as a defense against parasites and conspecifics, it may also serve to thwart olfactory-orientated predators. Combined with numerous other serpentine features of slow lorises, including extra vertebra in the spine leading to snake-like movement, serpentine aggressive vocalisations, a long dark dorsal stripe and the venom itself, we propose that venom may have evolved to mimic cobras (Naja sp.). During the Miocene when both slow lorises and cobras migrated throughout Southeast Asia, the evolution of venom may have been an adaptive strategy against predators used by slow lorises as a form of Mullerian mimicry with spectacled cobras.
Keywords: Venoms, Ecology, Primates, Intraspecific competition, Predation, Ectoparasite, Naja naja 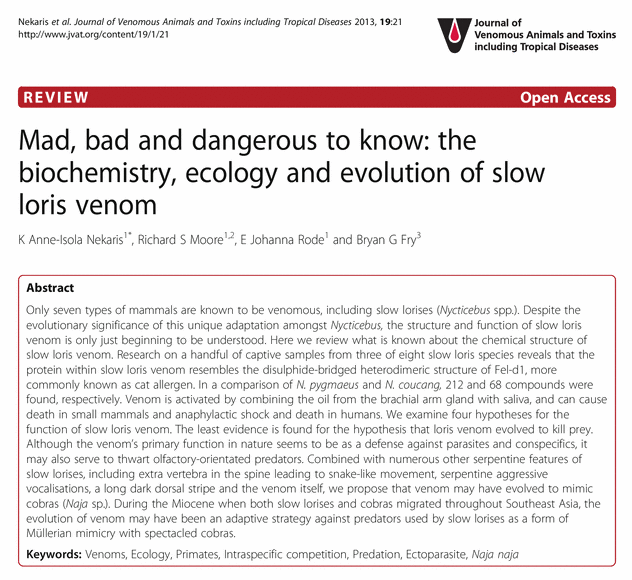