Pantherine felids (‘big cats’) include the largest living cats, apex predators in their respective ecosystems. They are also the earliest diverging living cat lineage, and thus are important for understanding the evolution of all subsequent felid groups. Although the oldest pantherine fossils occur in Africa, molecular phylogenies point to Asia as their region of origin. This paradox cannot be reconciled using current knowledge, mainly because early big cat fossils are exceedingly rare and fragmentary. Here, we report the discovery of a fossil pantherine from the Tibetan Himalaya, with an age of Late Miocene–Early Pliocene, replacing African records as the oldest pantherine. A ‘total evidence’ phylogenetic analysis of pantherines indicates that the new cat is closely related to the snow leopard and exhibits intermediate characteristics on the evolutionary line to the largest cats. Historical biogeographic models provide robust support for the Asian origin of pantherines. The combined analyses indicate that 75% of the divergence events in the pantherine lineage extended back to the Miocene, up to 7 Myr earlier than previously estimated. The deeper evolutionary origin of big cats revealed by the new fossils and analyses indicate a close association between Tibetan Plateau uplift and diversification of the earliest living cats. 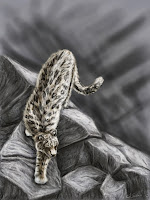 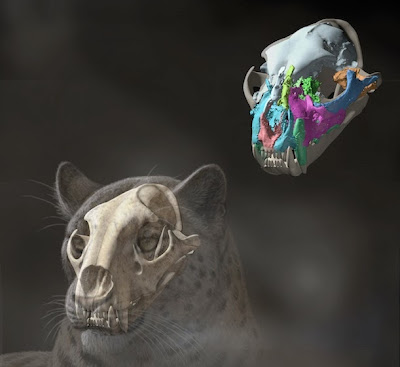 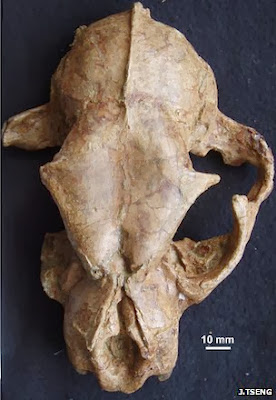 http://youtube.com/watch?v=Ck5TQJAwfaA
Step by step reconstruction of the new species of fossil pantherine cat from Tibet.
via Mauricio Anton

This Fossil Skull Unearthed in Tibet Is the Oldest Big Cat Ever Found
http://blogs.smithsonianmag.com/science/2013/11/this-fossil-skull-unearthed-in-tibet-is-the-oldest-big-cat-ever-found/   @SmithsonianMag