ABSTRACT
Field surveys were carried out at 14 locations in seven provinces of Thailand, from December 2001 to September 2006, searching for the Himalayan newt (Tylototriton verrucosus Anderson, 1871). The newt was found at 11 of the 14 locations visited, eight of which constitute new locality records for the species within Thailand. Our observations show that the Himalayan newts in Thailand can be divided into two types based on their distribution, body coloration, and female size. This species was generally found in small streams and ponds, usually in mountainous areas at least 1,000 m above sea level. The ecological and conservation implications of Tylototriton verrucosus in Thailand are discussed. 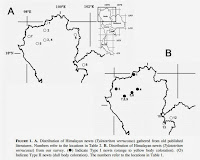