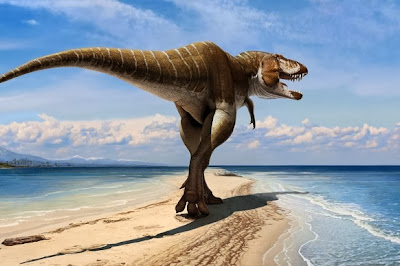 The Late Cretaceous (~95–66 million years ago) western North American landmass of Laramidia displayed heightened non-marine vertebrate diversity and intracontinental regionalism relative to other latest Cretaceous Laurasian ecosystems. Processes generating these patterns during this interval remain poorly understood despite their presumed role in the diversification of many clades. Tyrannosauridae, a clade of large-bodied theropod dinosaurs restricted to the Late Cretaceous of Laramidia and Asia, represents an ideal group for investigating Laramidian patterns of evolution. We use new tyrannosaurid discoveries from Utah—including a new taxon which represents the geologically oldest member of the clade—to investigate the evolution and biogeography of Tyrannosauridae. These data suggest a Laramidian origin for Tyrannosauridae, and implicate sea-level related controls in the isolation, diversification, and dispersal of this and many other Late Cretaceous vertebrate clades. 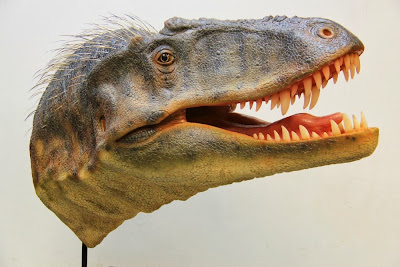 Etymology: Lythronax, from lythron (Greek), gore, and anax (Greek), king; and argestes (Greek), the Homeric wind from the southwest, in reference to the geographic location of the specimen within North America.

Lythronax argestes the "King of Gore"
A new species of Tyrannosaur recently uncovered in the badlands of Utah.
youtube.com/watch?v=gHb5BX4LEis
facebook.com/photo.php?fbid=10151742559931088

Lythronax: a new tyrant and the spread of the tyrannosaurs
A newly named tyrannosaur dinosaur supports the idea that the evolution of these animals was more provincial than previously thought

All hail the Southern King of Gore – Lythronax argestes. As names go in palaeontology that’s a superb entry and one that has more than a nice ring to it. While it is true that new dinosaurs are named all the time, new tyrannosaurs are generally considered rather special since they are not common, and the charisma of the group remains undimmed. Thus the naming of Lythronax in the journal PLOS ONE is unsurprisingly popular, but the animal has way more going for it than a cool name.
http://www.theguardian.com/science/2013/nov/06/lythronax-argestes-tyrannosaurs