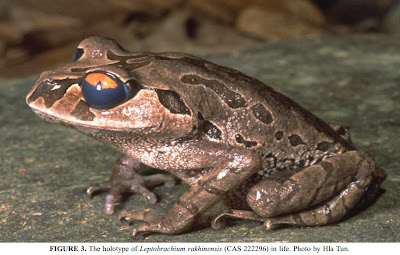 The faunal composition of the Myanmar populations of frogs in the genus Leptobrachium has been confused historically. The secretive nature of these frogs in combination with few systematic surveys throughout Myanmar has meant that sampling is sparse, not allowing for robust examination of morphological variation. Recent survey efforts in conjunction with historical collections have yielded for the first time a chance to evaluate the diversity of the genus Leptobrachium within Myanmar. While three allopatric populations of Leptobrachium species were discovered and all are distinguishable based on morphological differences, genetic analyses support that only one is distinct. A new species with a red and black bicolored iris with a blue scleral arc is described herein. In addition to the new species, a new country record is also reported.

Etymology. The specific epithet is derived from the name of the mountain range (The Rakhine Yoma) and
political province (Rakhine State) where this species was first encountered

Natural history and reproductive behavior. This species inhabits low elevation monsoonal rainforest, and
has been found in the Myanmar Coastal Rainforest and Mizarom-Manipur Kachin Rainforest ecoregions (Olson et al., 2001). The holotype was found moving in thick leaf litter or among rocks in small waterfalls in streams. The paratypes were found in primary evergreen rain forest. Two individuals (not collected) were observed being preyed upon by a large centipede (Scolopendromorpha; Scolopendra). In both instances the centipede had eaten the legs off of the frog.

Not much is known about the reproductive behavior of this species. Males were observed calling from the
ground in leaf litter in September (end of monsoon season). Females collected in September were gravid; the eggs of the species are cream colored, not bicolored.

Range. In Myanmar this species has been found in the Rakhine Hills (in Rakhine and Bago States) (Figure 6). Outside of Myanmar it may also occur in N.E. India and Bangladesh (see discussion).