Mammals dominate modern terrestrial herbivore ecosystems, whereas extant herbivorous reptiles are limited in diversity and body size. The evolution of reptile herbivory and its relationship to mammalian diversification is poorly understood with respect to climate and the roles of predation pressure and competition for food resources. Here, we describe a giant fossil acrodontan lizard recovered with a diverse mammal assemblage from the late middle Eocene Pondaung Formation of Myanmar, which provides a historical test of factors controlling body size in herbivorous squamates. We infer a predominately herbivorous feeding ecology for the new acrodontan based on dental anatomy, phylogenetic relationships and body size. Ranking body masses for Pondaung Formation vertebrates indicates that the lizard occupied a size niche among the larger herbivores and was larger than most carnivorous mammals. Paleotemperature estimates of Pondaung Formation environments based on the body size of the new lizard are approximately 2–5°C higher than modern. These results indicate that competitive exclusion and predation by mammals did not restrict body size evolution in these herbivorous squamates, and elevated temperatures relative to modern climates during the Paleogene greenhouse may have resulted in the evolution of gigantism through elevated poikilothermic metabolic rates and in response to increases in floral productivity. 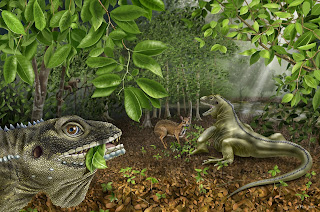 
'Lizard King' fossil shows giant reptiles coexisted with mammals during globally warm past
Some 40 million years before rock singer Jim Morrison's lyrics earned him the moniker "the Lizard King," an actual king lizard roamed the hot tropical forests of Southeast Asia, competing with mammals for food and other resources.
http://newsroom.unl.edu/ 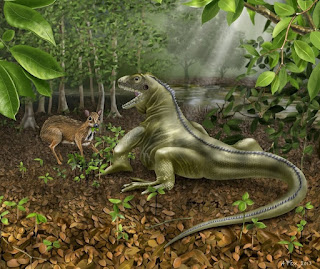 "And what makes Barbaturex doubly remarkable is that it lived alongside a diverse assemblage of herbivorous, omnivorous and carnivorous mammals where – get this – it was one of the largest members of the fauna."

The Squamozoic actually happened (kind of): giant herbivorous lizards in the Paleogene
http://blogs.scientificamerican.com/tetrapod-zoology/