Based on distinctive morphological and vocal characters we describe a new species of lowland tailorbird Orthotomus from dense humid lowland scrub in the floodplain of the Mekong, Tonle Sap and Bassac rivers of Cambodia. Genetic data place it in the O. atrogularis–O. ruficeps–O. sepium clade. All data suggest that the new species is most closely related to O. atrogularis, from which genetic differences are apparently of a level usually associated with subspecies. However the two taxa behave as biological species, existing locally in sympatry and even exceptionally in syntopy, without apparent hybridisation. The species is known so far from a small area within which its habitat is declining in area and quality. However, although birds are found in a number of small habitat fragments (including within the city limits of Phnom Penh), most individuals probably occupy one large contiguous area of habitat in the Tonle Sap floodplain. We therefore recommend it is classified as Near Threatened on the IUCN Red List. The new species is abundant in suitable habitat within its small range. Further work is required to understand more clearly the distribution and ecology of this species and in particular its evolutionary relationship with O. atrogularis.

Introduction
After a hiatus of over half a century owing to the intense human conflicts in the area, the last two decades have witnessed the discovery of a flush of novel bird taxa in Indochina. These recent discoveries have been facilitated by better sampling of remote micro-habitats and to a much lesser degree the greater use of nonmorphological characters in delimiting species. Most of these discoveries concerned babblers (Timaliidae) from isolated montane areas in Vietnam (Eames et al. 1994, Eames et al. 1999a,b, Eames & Eames 2001, Eames 2002). A smaller wave of discoveries involving a diverse range of taxa took place in forested limestone karst in Lao PDR, Vietnam and adjacent areas of China (Zhou Fang & Jiang Aiwu 2008, Woxvold et al. 2009, Alström et al. 2010). Only one new species, Mekong Wagtail Motacilla samveasnae, was named from Cambodian specimens, but it also occurs in Lao PDR, Thailand and Vietnam in ‘channel mosaic’ habitat on the Mekong and its major tributaries (Duckworth et al. 2001, Le Trong Trai & Craik 2008). Here we describe a new species of lowland tailorbird Orthotomus, confined to low elevation humid evergreen scrub in the floodplain of the Mekong and associated large rivers, in Cambodia

Etymology
The specific epithet ‘chaktomuk’ is a Khmer word meaning ‘four faces’. It is used in reference to the low-lying area at which the Tonle Sap, Bassac and Mekong rivers come together to form an ‘X’ centred on Phnom Penh, itself historically known as ‘Krong Chaktomuk’ (literally ‘City of Four Faces’). Based on current knowledge, the global distribution of the new species is restricted to scrub within the dynamic floodplain created by the confluence of these waters. We use chaktomuk as a noun in apposition to the genus name, and it is thus invariable. 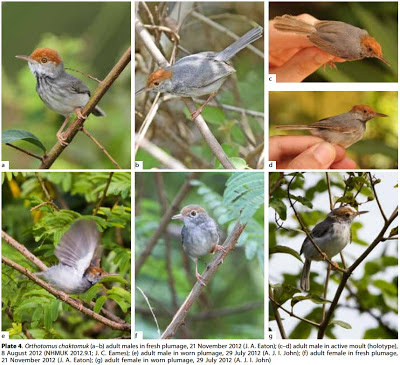 Orthotomus chaktomuk was not found in seemingly appropriate small seasonally flooded scrub patches at the northern limit of the Mekong floodplain (12°36’27.52”N 106°01’36.06”E) in Kratie province (Table SOM 1, J. A. Eaton verbally 2012). Satellite data indicate that there is little, if any, suitable habitat for O. chaktomuk in the Mekong floodplain in Vietnam and it is currently unrecorded there (although no specific searches have been conducted). As might be expected, we have located only O. atrogularis in scrub habitats outside of the Mekong, Tonle Sap and Bassac floodplain (where these records were within 10 km of superficially suitable habitat for O. chaktomuk they are mapped on Figure 1). Based on current knowledge of its range, the distribution of O. chaktomuk covers less than c.10,000 sq.km. (Figure 1); it therefore can be considered a restricted-range species (sensu Stattersfield et al. 1998). 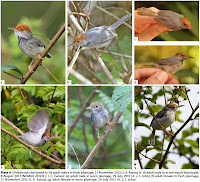