Reconstructing the earliest phases of primate evolution has been impeded by gaps in the fossil record, so that disagreements persist regarding the palaeobiology and phylogenetic relationships of the earliest primates. Here we report the discovery of a nearly complete and partly articulated skeleton of a primitive haplorhine primate from the early Eocene of China, about 55 million years ago, the oldest fossil primate of this quality ever recovered. Coupled with detailed morphological examination using propagation phase contrast X-ray synchrotron microtomography, our phylogenetic analysis based on total available evidence indicates that this fossil is the most basal known member of the tarsiiform clade. In addition to providing further support for an early dichotomy between the strepsirrhine and haplorhine clades, this new primate further constrains the age of divergence between tarsiiforms and anthropoids. It also strengthens the hypothesis that the earliest primates were probably diurnal, arboreal and primarily insectivorous mammals the size of modern pygmy mouse lemurs.

The Archicebus skeleton is roughly 7 million years older than the previously known oldest fossil primate skeletons, which include Darwinius from Messel, Germany, and Notharctus from the Bridger Basin, Wyoming.

Archicebus is not the oldest primate, "this new species will significantly impact our understanding of what is primitive for the common ancestor of living primates," Mary Wilcox said, anthropologist of the University of Toronto Scarborough, Canada. 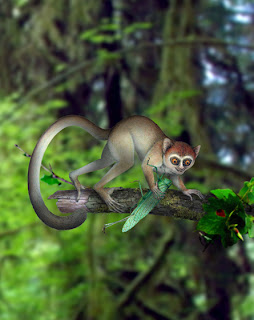 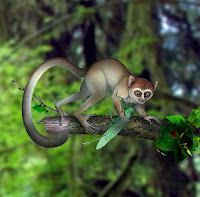 Tiny, Insect-eating Animal becomes Earliest known Primate
Archicebus achilles lived 55m years ago in what is now China and is the ancestor of all monkeys, apes and humans