[Paleontology • 2010] Gryposaurus: a taxonomic revision of the genus & The braincase and skull roof of Gryposaurus notabilis (Dinosauria, Hadrosauridae)

Abstract
The facial and neurocranial anatomy of AMNH 5350, containing the most complete braincase available for Gryposaurus, is described in detail. The specimen, collected from Late Campanian outcrops of the Dinosaur Park Formation of southern Canada, is referred to G. notabilis because of the combination of a preorbital nasal protuberance positioned above the level of the frontals, narrow U-shaped posterior margin of the narial fenestra, dorsal margin of the infratemporal fenestra being wider than that of the orbit, and posterodorsal margin of the squamosal located dorsal to the skull roof. The flat nasal protuberance of AMNH 5350 differs from the arcuate lateral profile displayed in other specimens of G. notabilis, indicating that substantial intraspecific variation existed in this feature. The taxonomy of Gryposaurus is revised in light of the newly garnered anatomical data. Thus, G. incurvimanus is regarded as a junior synonym of G. notabilis, composed of subadult specimens of the latter. Characters thought to be diagnostic of G. incurvimanus are either present in G. notabilis (e.g., slightly excavated ventral surface of the nasal protuberance) or probably indicative of sub-adulthood (e.g., less developed and more anteriorly positioned nasal protuberance correlated with smaller skull size). A number of characters previously used to distinguish among Gryposaurus sepecies are shown to be intraspecifically variable (e.g., curvature of the lateroventral margin of the maxilla or ventral deflection of the dentary symphyseal process). 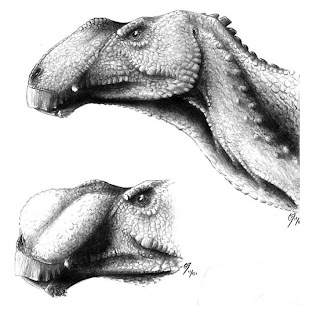 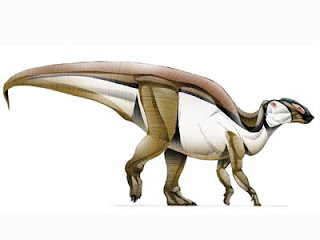