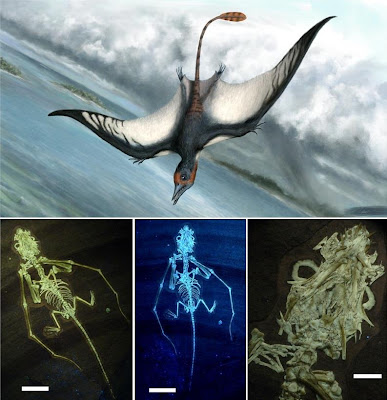 Background
The ‘Solnhofen Limestone’ beds of the Southern Franconian Alb, Bavaria, southern Germany, have for centuries yielded important pterosaur specimens, most notably of the genera Pterodactylus and Rhamphorhynchus. Here we describe a new genus of non-pterodactyloid pterosaur based on an extremely well preserved fossil of a young juvenile: Bellubrunnus rothgaengeri (gen. et sp. nov.).

Methodology/Principal Findings
The specimen was examined firsthand by all authors. Additional investigation and photography under UV light to reveal details of the bones not easily seen under normal lighting regimes was completed.

Conclusions/Significance
This taxon heralds from a newly explored locality that is older than the classic Solnhofen beds. While similar to Rhamphorhynchus, the new taxon differs in the number of teeth, shape of the humerus and femur, and limb proportions. Unlike other derived non-pterodacytyloids, Bellubrunnus lacks elongate chevrons and zygapophyses in the tail, and unlike all other known pterosaurs, the wingtips are curved anteriorly, potentially giving it a unique flight profile.

Etymology: From the Latin ‘bellus’ meaning beautiful and Brunn from the locality of the holotype specimen. This then is the beautiful one of Brunn. The species name honours Monika Rothgaenger who found the holotype.