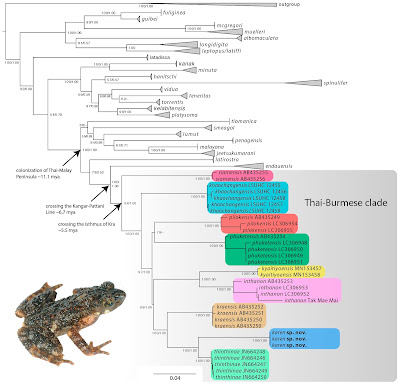 Distribution: Ansonia karen sp. nov. is currently known only from the type locality and nearby locality in same forest stream in the environs of Khao Laem Mountain, in Suan Phueng District of Ratchaburi Province in western Thailand, less than 2.0 km from the international Thai–Myanmar border (Fig. 1). The new species likely inhabits the middle portion of the Northern Tenasserim Mountain range (between the Kanchanaburi and Prachuap Khiri Khan provinces), and is expected to occur in adjacent montane areas in the western part of Phetchaburi Province of Thailand and Thanintharyi Division of Myanmar.
Natural history:
The new species inhabits a polydominant montane tropical evergreen forest on Khao Laem Mountain at elevations from ca. 700 to 750 m a.s.l., where the adult specimens were observed at night perched on leaves or stones (Fig. 7B–C) along an approximately 1–3 m wide, slow-flowing mountain stream (Fig. 7A), or beneath stones along the stream’s edge. The multi-species polydominant tropical forest at the type locality has dense vegetation with tangles of giant bamboo Dendrocalamus asper (Schult.) Backer. Males were calling during our field observations from June to November throughout 2017–2019. The tadpoles of the new species were recorded in the same stream and were usually concentrated in pools under small waterfalls, hiding under gravel on the stream bottom, or sitting on the vertical surfaces of large submerged boulders to which they were attached by their oral discs (Fig. 7D).
The species of amphibians and reptiles recorded in sympatry with the new species at the type locality include: Leptobrachium tenasserimense Pawangkhanant, Poyarkov, Duong, Naiduangchan & Suwannapoom, L. smithi Matsui, Xenophrys cf. major (Boulenger), Leptobrachella melanoleuca (Matsui), L. fuliginosa (Matsui), Amolops panhai Matsui & Nabhitabhata, Alcalus tasanae (Smith), Limnonectes jarujini Matsui, Panha, Khonsue & Kuraishi, L. doriae (Boulenger), L. macrognathus (Boulenger), M. berdmorei (Blyth), Acanthosaura crucigera Boulenger, Pseudoxenodon macrops (Blyth), Trimeresurus popeiorum Smith, and Rhabdophis chrysargos (Schlegel).
Etymology: The specific name “karen” is given as a noun in apposition and refers to the name of the Karen people. Originally inhabiting wide areas in southern and southeastern Myanmar, many Karen have migrated to Thailand, having settled mostly on the Thailand–Myanmar border, including the Suan Phueng District, the type locality of the new species, due to the political turmoil during the end of XX – beginning of XXI centuries. We received significant help and assistance from the local Karen community in Suan Phueng during our field surveys and want to thank them for their permanent support. Nikolay A. Poyarkov also thanks Karen Sarkisian for his support and encouragement. 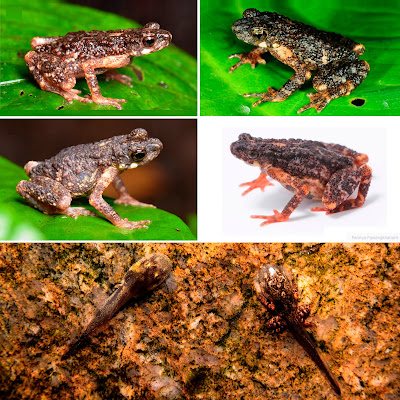