Abstract
Albanerpetontids are tiny, enigmatic fossil amphibians with a distinctive suite of characteristics, including scales and specialized jaw and neck joints. Here we describe a new genus and species of albanerpetontid, represented by fully articulated and three-dimensional specimens preserved in amber. These specimens preserve skeletal and soft tissues, including an elongated median hyoid element, the tip of which remains embedded in a distal tongue pad. This arrangement is very similar to the long, rapidly projecting tongue of chameleons. Our results thus suggest that albanerpetontids were sit-and-wait ballistic tongue feeders, extending the record of this specialized feeding mode by around 100 million years. 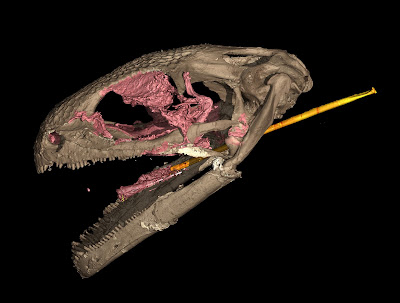 Amphibia Linnaeus 1758.
Albanerpetontidae Fox & Naylor 1982.
Yaksha perettii gen. et sp. nov.
Holotype: Peretti Museum Foundation, Switzerland, GRSRef-060829 (15), a complete articulated skull.
Locality and horizon: GRS-Ref-060829 (holotype) and GRS-Ref-27746 (referred material) were ethically sourced from the Hukaung Valley, near Tanaing Township, Myitkyina District, Kachin Province, Myanmar, and legally exported (materials and methods section S1.1 in the supplementary materials). The juvenile paratype, JZC Bu154, is recorded as being from ~100 km west of the Myitkyina District. Amber from these mines has been dated as early Cenomanian, ~99 million years ago (Ma), using U-Pb isotopes
Etymology: The generic name is derived from Yaksha, a type of mythical spirit in Eastern belief systems, guardian of natural treasures hidden in the earth or tree roots. The specific epithet recognizes Adolf Peretti, director of the Peretti Museum Foundation and GemResearch Swisslab (GRS), who discovered the fossil and has conducted fieldwork and humanitarian projects in Myanmar for the past 10 years. 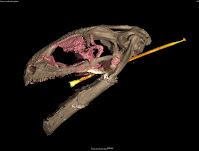 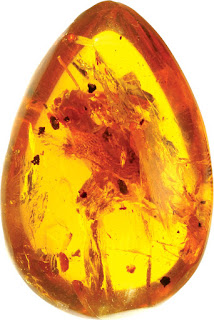 Ancient amphibians preserved in amber
Extant amphibians are represented by three fairly simple morphologies: the mostly hopping frogs and toads, the low-crawling salamanders, and the limbless caecilians. Until the early Pleistocene—and for more than 165 million years—there was another group, the albanerpetontids. We know little about this group because amphibian fossils are poorly preserved, and previous specimens from this group are both rare and mostly badly damaged. Daza et al. describe a set of fossils preserved in amber showing that this group was unusual both in their habitat use (they may been climbers) and their feeding mode, which appears to have been convergent with the ballistic feeding now seen in chameleons (see the Perspective by Wake).
Earliest example of a rapid-fire tongue found in ‘weird and wonderful’ extinct amphibians
floridamuseum.UFL.edu/science/earliest-rapid-fire-tongue-found-in-amphibians/
เขียนโดย pskhun ที่ 9:28 AM