Abstract
Madagascar’s emblematic traveller’s tree is a monospecific genus within Strelitziaceae, the family of the South African bird of paradise. Until now, this endemic genus consisted of a single species: Ravenala madagascariensis Sonn., which is grown everywhere in the tropics as an ornamental plant. The plant is immediately recognizable for its huge fan-forming banana-like leaves and is locally referred to in Magagascar by several vernacular names. “Variants” have been mentioned in the literature, but without any attempt to recognize formal taxa based on diagnostic features. In this paper, we formally describe five new species and fix the application of the name R. madagascariensis to the populations growing on the eastern coast of Madagascar, with the epitype growing in the marshy Fort-Dauphin area in the south. This paper has numerous implications for conservation biology and other domains of life sciences, due to the importance of this genus for the conservation of Madagascan ecosystems, the ornamental plant trade, as well as for its invasive status in several tropical areas. 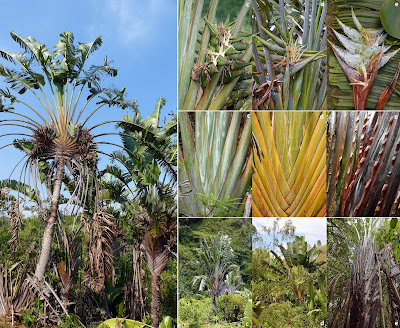 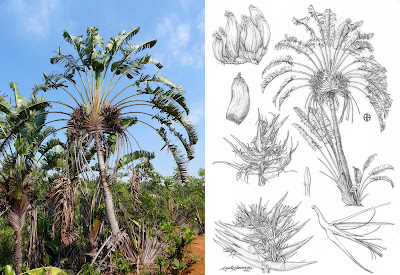 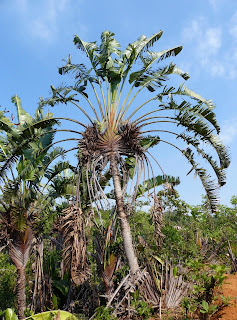 Ravenala agatheae Haev. & Razanats. sp. nov.
Diagnosis Similar to Ravenala madagascariensis but differs in its dark green narrower laminae, tricolor petioles with very developed dryish petiole sheath margins, very waxy petioles, the persistence of older infructescences for several years, a purple stripe on the bract margin, longer bracts, a whitish perianth, brown blotches on its mature fused petals, the bracteole apex tinged with pink, an ovoid pointed stigma, dense infructescences, smaller inflorescences, the free petal much shorter than the fused petals, and an end of year flowering period.
Ecology This species is adapted to seasonally dry and warm coastal habitats, growing on slopes at low elevations in north-western coastal areas of Madagascar, from Antsiranana (Diego-Suarez) down to the Melaky region in the Mahajanga province.
Etymology This species is named after to the first author’s wife, Agathe Haevermans, a botanical illustrator at the Muséum National d’Histoire Naturelle, who helped discover this species in the field with the collecting team and who contributes greatly to botany by producing illustrations of new taxa from biodiversity hotspots such as Madagascar. 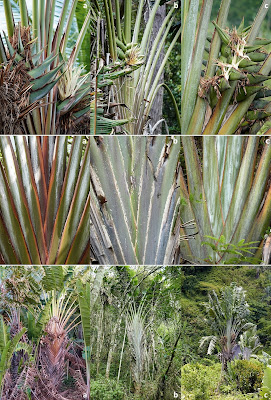 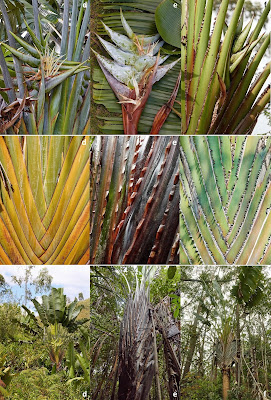 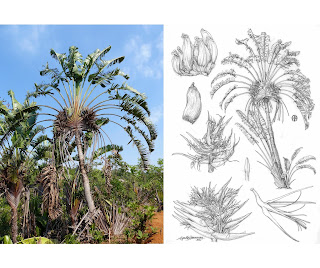