Abstract
Recent taxonomic and systematic research on Cyrtodactylus khasiensis has found that this nomen comprises a large number of superficially similar but deeply divergent species-level taxa from throughout north-east India and surrounding countries. In this study we focus on the taxonomic status of recently surveyed populations from the East Garo Hills and West Garo Hills districts and a single specimen collected from Ri Bhoi District in Meghalaya State, north-east India. Based on a combination of morphological and molecular data we found that the Ri Bhoi specimen is conspecific with the recently described C. urbanus, and that the Garo Hills populations represent a new species of Cyrtodactylus described herein. Molecular analyses (using the NADH dehydrogenase 2, nd2 and adjoining tRNA genes) demonstrate that the new species is nested within the khasiensis group of the Indo-Burma radiation of Cyrtodactylus, and is well-supported as sister to a clade that comprises C. septentrionalis and C. guwahatiensis. We morphologically compare the new C. urbanus specimen with the original description of the species, identify a number of errors and ambiguities in the original description, and notably expand the known morphological variation for the species based on 23 characters. The discovery of an endemic new species of lizards from the Garo Hills further highlights the region as an overlooked centre of biodiversity importance. We discuss several misidentifications in the literature of other reptile species from the region emphasising the need for further attention by taxonomists to review the herpetofauna of the Garo Hills.
Keywords: Biodiversity, taxonomy, lizard, reptile, endemic
Cyrtodactylus bapme sp. nov.
Morphological character summary. Cyrtodactylus bapme sp. nov. is a moderate-sized gecko (SVL 69.9– 77.0 mm); 8–12 supralabials; 8–10 infralabials; dorsal tubercles are smooth to weakly keeled, bluntly conical; 21–24 dorsal tubercle rows; ca. 32–37 paravertebral tubercles between the level of the axilla and the level of the groin; 30–39 midventral scale rows; 0–13 pit-bearing (without true pore) precloacal scales in a continuous series in females, condition in males unknown; 12–19 subdigital lamellae on finger IV (excluding non-lamellar scales between the proximal and apical lamellae series); 15–22 subdigital lamellae on toe IV (excluding nonlamellar scales between the proximal and apical lamellae series); no single row of transversely enlarged subcaudal scales; 7–9 paired dark brown dorsal blotches on the dorsum; 10–12 alternating dark and light bands on the dorsum of the tail.
Etymology. The specific epithet “bapme” is derived from the word for “gecko” in the Garo language of the A’chik Mande (“Garo people”), the tribe indigenous to the region where the species occurs. The name is treated as a noun in apposition.
Suggested Common name. Garo Hills Bent-toed Gecko. 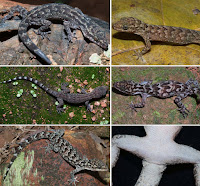