Abstract
The hip-pocket frog (Assa darlingtoni), a small terrestrial myobatrachid frog found in mid-eastern Australia, has a highly derived, unusual, reproductive mode involving a unique form of male parental care. Males have subcutaneous pouches that open near the hip, and the developing tadpoles are carried in these pouches to post metamorphosis. It is found on several isolated mountain ranges in closed forest habitats, associated with high rainfall and temperate or sub-tropical climates. We established genetic relationships among specimens sampled across the range using phylogenetic analyses of thousands of single nucleotide polymorphisms (SNPs) from the nuclear genome and mitochondrial ND2 gene nucleotide sequences. These analyses uncovered two lineages that are genetically distinct in both nDNA and mtDNA analyses and that have low levels of divergence in male advertisement calls and are morphologically cryptic. Our data support separate species status for each lineage, based on the molecular genetic data. The first, which we name as a new species, Assa wollumbin sp. nov., is restricted to a single mountain, Wollumbin (= Mount Warning), the eroded cone of an ancient shield volcano—the Tweed Volcano. The second, the nominal species A. darlingtoni, has a wider distribution in five geographically disjunct subpopulations along 430 km of the Great Dividing Range in south-eastern Queensland and north-eastern New South Wales. The distributions of the two species closely approach within 15 km of each other on the central plug and rim of the caldera of the Tweed Volcano. Assa wollumbin sp. nov. meets the conservation criteria for Critically Endangered [A3(e), B2(a,b)]. When all subpopulations of A. darlingtoni are combined the conservation assessment is Endangered [A3(e), B2(a,b)]. Because of the fragmented nature of the distribution of A. darlingtoni, combined with the genetic evidence of concordant sub-structuring, we also conducted a conservation assessment on the five subpopulations. Two were assessed as Critically Endangered (D’Aguilar Range and Conondale/Blackall Ranges), and the remainder as Endangered (Dorrigo Plateau, McPherson Ranges, and Gibraltar Ranges/Washpool).
Keywords: Amphibia, Assa darlingtoni, Anura, Myobatrachidae, mtDNA, single nucleotide polymorphisms, nuclear genome, phylogenetic analysis, conservation status 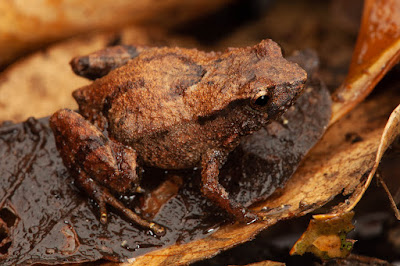 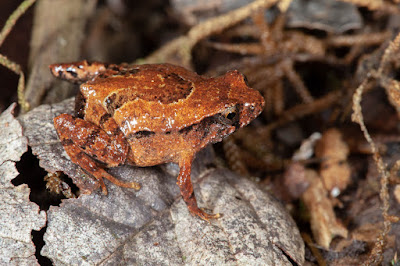