Abstract
Amber fossils provide snapshots of the anatomy, biology, and ecology of extinct organisms that are otherwise inaccessible. The best-known fossils in amber are terrestrial arthropods—principally insects—whereas aquatic organisms are rarely represented. Here, we present the first record of true crabs (Brachyura) in amber—from the Cretaceous of Myanmar [~100 to 99 million years (Ma)]. The new fossil preserves large compound eyes, delicate mouthparts, and even gills. This modern-looking crab is nested within crown Eubrachyura, or “higher” true crabs, which includes the majority of brachyuran species living today. The fossil appears to have been trapped in a brackish or freshwater setting near a coastal to fluvio-estuarine environment, bridging the gap between the predicted molecular divergence of nonmarine crabs (~130 Ma) and their younger fossil record (latest Cretaceous and Paleogene, ~75 to 50 Ma) while providing a reliable calibration point for molecular divergence time estimates for higher crown eubrachyurans. 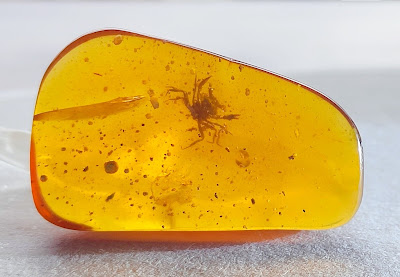 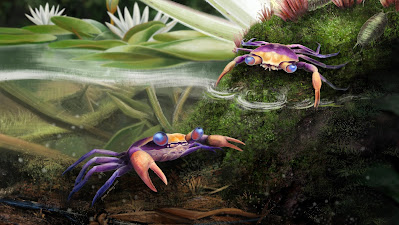 Systematic paleontology
Euarthropoda Lankester, 1904
Decapoda Latreille, 1802
Brachyura Latreille, 1802
Eubrachyura Saint Laurent, 1980
Cretapsaridae Luque, fam. nov.
Included genus: Cretapsara Luque, gen. nov., by monotypy.
Diagnosis: As for type genus and species.
Remarks: Cretapsara athanata n. gen. et sp. differs from any known crab family in its combination of plesiomorphic and apomorphic characters. Superficially, it shares some resemblance to some marine eubrachyuran families such as Eogeryonidae, from the Upper Cretaceous of Spain [Eogeryon elegius, Cenomanian (14)] (Fig. 5H) and the Lower Cretaceous of Brazil [Romualdocarcinus salesi, Albian (15)], and Marocarcinidae, from the Upper Cretaceous of Morocco [Marocarcinus pasinii, Cenomanian (16)] (Fig. 5E). Cretapsara differs from Eogeryonidae and Marocarcinidae in the presence of a bilobate rostrum and lack of orbital fissures, compared to the bifid and acute rostrum and two well-developed orbital fissures diagnostic of these two families [Marocarcinidae was initially interpreted as having no orbital fissures due to the erroneous interpretation of the eyestalks as part of the orbit (16) but is here recognized as having two orbital fissures and scored as such in our analysis].
Cretapsara athanata Luque, gen. et sp. nov.
Etymology: The genus name combines Creta (Latin), for chalk as in Cretaceous, and Apsara, a spirit of the clouds and waters; gender is feminine. The specific epithet is based on athanatos (Greek), immortal, referring to its lifelike preservation. The family name is based on the only known genus, erected herein.
Holotype: Specimen LYAM-9 (Figs. 1 and 2) deposited in the Longyin Amber Museum, Xishan District, Kunming 650228, Yunnan Province, China. Specimen collected by local miners in 2015.
Type locality and horizon: Angbamo site, Tanai Township, Myitkyina District, Kachin Province, Myanmar [~98.8 ± 0.6 Ma; lowermost Cenomanian (17–19)].
Diagnosis: The carapace is subhexagonal, nearly as long as it is wide; the orbitofrontal margin is nearly as wide as the body and bears wide, shallow orbits that lack supraorbital fissures or intraorbital spines. The rostrum is bilobate, short, and wide, measuring about half the width of the orbitofrontal margin. The anterolateral margin is one-third as long as the posterolateral margin, and it bears a small outer orbital spine and two short subtriangular anterolateral spines; the posterolateral margin is straight to slightly convex, and it bears at least four small and equidistant tubercles. The posterior margin is wide, nearly straight, rimmed, and apparently ornamented with a row of small tubercles. The cervical and branchiocardiac grooves are well developed, reach the lateral margins of the body, and are expressed ventrally; the dorsal regions are well developed and delimited by grooves. The buccal cavern is wide, covered by a pair of operculiform mxp3 that lack a V-shaped incision in the occlusal margin. The thoracic sternites 1 to 3 are visible ventrally and are separated from a subtrapezoidal sternite 4 by a shallow groove. Sternites 5 and 6 are similar in shape; sternite 5 is the widest of all, and sternites 6 to 8 reduce in size posteriorly. The sterno-abdominal cavity is shallow, and there is no evidence of a linea media traversing the sternites. The pleon has a small subtriangular telson and, based on the stereomicroscope images and the micro-CT scanning, apparently has six free and unfused pleonites, from which at least the first two are fully visible dorsally; there is no evidence of uropods or uropod remains. The eyes are as large as the orbits; the corneal eye is globular, as wide as it is long, and apparently covered by small hexagonal facets; the eyestalk is short and cylindrical. The antennulae and antennae are reduced. The claws or chelipeds are equal in shape and size, and the four pairs of walking legs are well developed, slender, and similar in size and shape; they lack chelate, subchelate, or flattened distal podomeres (e.g., propodi and dactyli); the podomeres are semicircular in cross section. Excurrent openings are well developed, small, and circular. 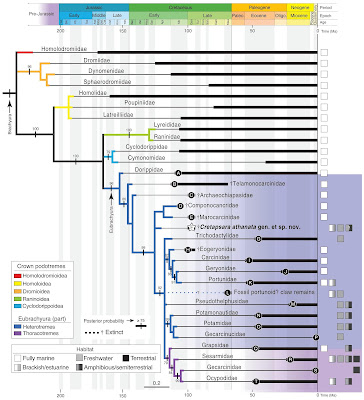 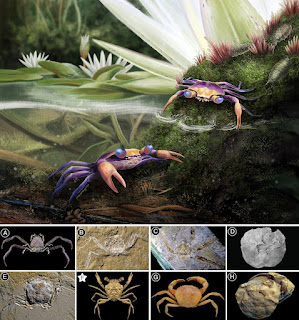 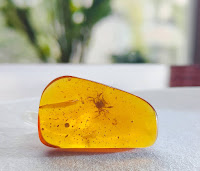 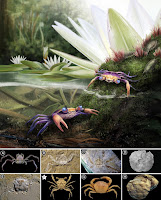 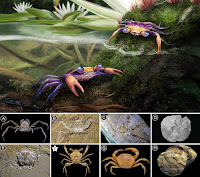