A surprising amount of hidden phylogenetic diversity exists in the small to medium size, drab colored squirrels of the genus Sundasciurus. This genus is endemic to Sundaland and the Philippines, where it is widespread. An earlier revision of this genus found that the high elevation ‘populations’ of the widespread, lowland slender squirrel (S. tenuis) were different species. Previous phylogenies based on mitochondrial cytochrome b sequences also suggested that the widespread, lowland Low’s squirrel (S. lowii) and the narrow endemic Fraternal squirrel (S. fraterculus) are not reciprocally monophyletic. Additionally, deep divergences have been identified between lineages within Low’s squirrel that date to the early Pliocene. Here we focus on evaluating the relationships and differences within and between populations of these two nominal species using whole mitochondrial genome sequences, nuclear intron sequences, and morphology. We reassess the taxonomy of this group, revalidate the species status of Robinson’s squirrel (Sundasciurus robinsoni Bonhote, 1903) support the species level recognition of the Natuna squirrel (Sundasciurus natunensis Thomas, 1895) and identify three other lineages that require further study. We estimate times of divergence and integrate geologic history to find that most of the divergences are pre-Pleistocene, and thus predate the Pleistocene flooding of Sundaland. Biogeographic, and ecological factors may have played a more important role than climatic factors in generating these patterns. While divergence in allopatry seems to be the main process driving speciation in lowland Sundaland squirrels (Sundasciurus), ecomorphological and behavioral adaptations in this clade suggest an important role of niche divergence.

Distribution: Malay Peninsula, Sumatra, and Batu and Rhio Archipelagos. The subspecies S. r. robinsoni and S. r. balae have been recorded from 0–610 m, on the Malay Peninsula and Rhio and Sumatra and Batu, respectively, while S. r. vanakeni has been recorded between 900–1372 m on Mount Kerinci.

Distribution: Southern Natuna islands (only recorded in Sirhassen Island), and possibly in west Borneo. Despite discrete characters such as postorbital processes and tail shape of the latter populations closely resemble S. natunensis, we currently consider the taxonomic status of west Borneo populations as incertae sedis given the intermediate phenotypic position of these among S. natunensis and S. lowii shown in the PCA and DAPC and the lack of genetic evidence. Genetic data from these, southern Sumatra and northern Natuna populations is needed to clarify the taxonomy and distribution of this group.

Molecular species delimitation analyses suggest the presence of three species in Borneo within S. lowii (in Sabah, Sarawak and East Kalimantan). However, phenotypic divergence seems to be slight and the fine scale distribution of the morphs is unknown. The only Sarawak sample included in the PCA was clustered separately but close to Sabah + east Kalimantan, that largely overlapped. Regarding the DAPC, only east Kalimantan samples were differentiated from the remaining overlapping populations. Relative size of interorbital breadth seems to differentiate a small number of Sarawak specimens from the remaining S. lowii, but these samples are clustered very close to the other S. lowii. Sarawak specimens also seem to have darker fur than Sabah and East Kalimantan S. lowii and a lack of blond tips on the tail, which are only observed in Sabah populations. We consider these populations unconfirmed candidate species (Padial et al., 2010) until a better molecular and morphological sampling is performed in terms of geographic coverage and number of specimens included.

As pointed out by Hawkins et al. (2016a) the two subgenera, Aletesciurus and Sundasciurus, proposed by Moore (1958) are not supported as reciprocally monophyletic groups. The discrete characters (presence of sagittal crest, skull size, and shape of anterior-mesial lobe of auditory bullae) described as distinguishing subgenera were not valid for all species. For instance, the Palawan mountain squirrel (Sundasciurus rabori) belongs to Aletesciurus but lacks a sagittal crest and has an intermediate antero-mesial lobe and skull size (40.9-43.6 mm) among both subgenera (Heaney, 1979; Hawkins et al., 2016a). The northern Palawan tree squirrel (Sundasciurus juvencus) shows an antero-mesial lobe that resembles that of the subgenus Sundasciurus despite being assigned to Aletesciurus. Finally, different species of the subgenus Sundasciurus such as S. lowii, S. tahan or S. altitudinis have skulls that reach sizes (41–43 mm) that overlap with those of S. rabori (authors unpublished data). Although these discrete characters do not support the subgenera Aletesciurus and Sundasciurus, Heaney (1979) found support for them in his morphometric analyses. Molecular phylogenies suggest that there are 5–6 major phylogenetic lineages within Sundasciurus, which correspond to monophyly in the subgenus Aletesciurus (which contains 3 divergent clades), and paraphyly in the subgenus Sundasciurus (which also contains 2–3 divergent clades) (Den Tex et al., 2010; Hawkins et al., 2016a). The lack of universally valid diagnostic features and the phylogenetic evidence from this and previous studies demonstrate that current Sundasciurus subgeneric classification is invalid, so we synonymize Aletesciurus with Sundasciurus. 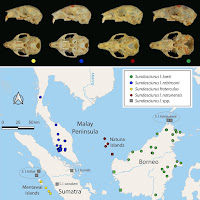 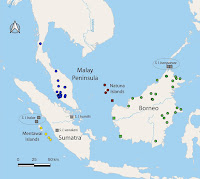 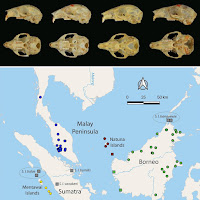 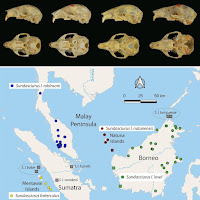