Sauropodomorpha were herbivorous saurischian dinosaurs that incorporate Sauropoda and early-diverging sauropodomorphs. The oldest sauropodomorph remains are known from Late Triassic deposits, most of them Gondwanan. The Laurasian record comprises some Triassic forms, but the bulk is Jurassic in age. Among the 14 Jurassic non-sauropodan sauropodomorphs from Laurasia described in the past, 8 are from China. Here we describe a new non-sauropodan sauropodomorph, Irisosaurus yimenensis gen. et sp. nov., from the Early Jurassic Fengjiahe Formation of China. Nearly all of the non-sauropodan sauropodomorph genera currently known from China were first reported from the Lufeng Formation. The Fengjiahe Formation is its Southern equivalent, bringing a fauna similar to that of the Lufeng Formation to light. The new genus is defined based on an incomplete but unique maxilla, with a premaxillary ramus higher than long prior to the nasal process, a large and deep neurovascular foramen within the perinarial fossa, and a deep perinarial fossa defined by a sharp rim. Phylogenetic analysis places Irisosaurus at the very base of Sauropodiformes, as the sister-taxon of the Argentinean genus Mussaurus. This specimen adds to a growing assemblage of Chinese Jurassic non-sauropodan sauropodomorphs that offers new insight into the Laurasian evolution of this clade.

Etymology: The generic nomen refers to the famous iridescent clouds of Yunnan Province (彩云之南). The specific epithet refers to Yimen County, where the type locality is located.

Horizon and locality: Upper member of the Fengjiahe Formation, Lower Jurassic. The specimen was collected during the summer 2018 at Jiaojiadian area B, near Zhanmatian village, Shijie Township, Yimen County, Yuxi Prefecture, Yunnan Province, China (Fig. 1). The Fengjiahe Formation is the oldest Lower Jurassic unit in the Province13. The fossil-bearing strata is characterized by reddish argillaceous siltstone (Fig. 2).

Diagnosis: A small sauropodiforme distinguished from other non-sauropodan sauropodomorphs based on the following unique combination of character states (autapomorphies marked with a *): scarce and small nutrient foramina on the lateral surface of the maxilla, large and deep neurovascular foramen in the perinarial fossa*, deep perinarial fossa defined by a sharp rim*, premaxillary ramus of the maxilla higher than long prior to the nasal process*, lack of antorbital fossa (associated with the presence of a medial lamina), teeth lacking denticles (convergence with Yunnanosaurus huangi3, 14), strongly asymmetrical proximal half of metacarpal V*. 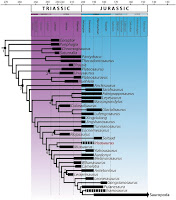 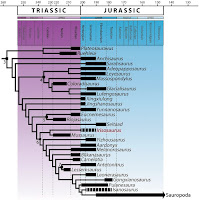 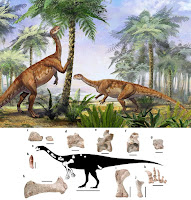