Summary
Modern whales and dolphins are superbly adapted for marine life, with tail flukes being a key innovation shared by all extant species. Some dolphins can exceed speeds of 50 km/h, a feat accomplished by thrusting the flukes while adjusting attack angle with their flippers. These movements are driven by robust axial musculature anchored to a relatively rigid torso consisting of numerous short vertebrae, and controlled by hydrofoil-like flippers. Eocene skeletons of whales illustrate the transition from semiaquatic to aquatic locomotion, including development of a fusiform body and reduction of hindlimbs, but the rarity of Oligocene whale skeletons has hampered efforts to understand the evolution of fluke-powered, but forelimb-controlled, locomotion. We report a nearly complete skeleton of the extinct large dolphin Ankylorhiza tiedemani comb. n. from the Oligocene of South Carolina, previously known only from a partial rostrum. Its forelimb is intermediate in morphology between stem cetaceans and extant taxa, whereas its axial skeleton displays incipient rigidity at the base of the tail with a flexible lumbar region. The position of Ankylorhiza near the base of the odontocete radiation implies that several postcranial specializations of extant cetaceans, including a shortened humerus, narrow peduncle, and loss of radial tuberosity, evolved convergently in odontocetes and mysticetes. Craniodental morphology, tooth wear, torso vertebral morphology, and body size all suggest that Ankylorhiza was a macrophagous predator that could swim relatively fast, indicating that it was one of the few extinct cetaceans to occupy a niche similar to that of killer whales. 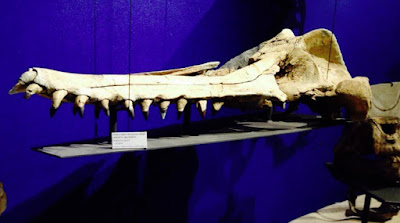 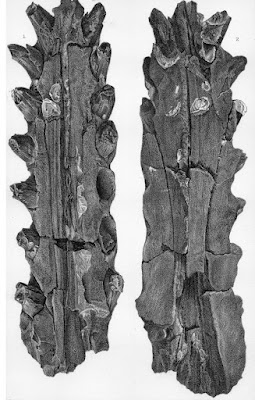 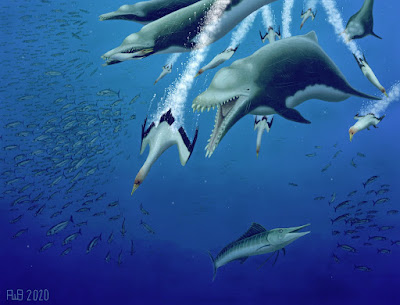