Abstract
Gymnogeophagus jaryi, new species, is described from Southern tributaries of the Middle Paraná basin in Misiones. It can be distinguished from all other members of the genus, except from G. australis and G. caaguazuensis, by the presence of a hyaline to grey anterior portion of the dorsal fin. Gymnogeophagus jaryi differs from G. caaguazuensis by a longer caudal peduncle, caudal fin not lyrate, central portion of scales on dorsal portion of trunk light iridescent blue and by white spots in soft portion of dorsal fin in adult males, and from G. australis by the light iridescent blue coloration of central portion of scales on the dorsal portion of trunk and tail, and by the lack of scales on the soft portion of the dorsal fin. Additionally, it can be diagnosed by the following unique combination of characters: 10–11 dorsal-fin branched rays, 27–30 E1 scales, absence of lips thickening, and, in males, by the possession of a hump in adults, caudal fin not lyrate, presence of large white spots forming transversal stripes distally and in anterior area of the dorsal fin’s soft portion, central area of scales on the dorsal portion of the trunk light iridescent blue, lack of scales on the base of the dorsal fin’s soft portion, absence of a conspicuous and oblique dark band from the eye to the anterior border of the head, anterior portion of dorsal fin hyaline to grey, scales of the midlateral spot each bearing a semicircular light blue blotch, head hump starting at the horizontal through the eyes, concave anterior profile in lateral view, base of unpaired fins yellow, and whitish hyaline spots on caudal fin. The new species, based on mtDNA phylogeny, is the sister species of G. caaguazuensis from the Paraguay basin and is closely related to G. australis.

Diagnosis: The number of E1 scales, 27–30 (vs. 23–25), and the possession of a cephalic hump in adult males, distinguishes the new species from all species of the G. rhabdotus species group (G. rhabdotus, G. meridionalis, G. setequedas, G. che, G. terrapurpura and G. taroba). It is distinguished from all species of the G. gymnogenys group, except G. caaguazuensis and G. australis, by having the anterior portion of the dorsal fin grey to hyaline, in few specimens grey slightly reddish, with no markings (vs. red to yellow with hyaline spots or elongated transversal blotches). It differs from G. caaguazuensis by a longer caudal peduncle (18.5–22.0 vs. 13.9–17.4, % SL), caudal fin not lyrate (vs. lyrate), central portion of scales on dorsal portion of trunk light iridescent blue (vs. golden to greenish) and, in adult males, white spots in the soft portion of the dorsal fin, sometimes elongated in the distal portion forming lines (vs. with spaced small silvery to bright blue dots in G. caaguazuensis). It differs from G. australis by the light iridescent blue coloration of the central portion of scales on the dorsal portion of trunk and tail (vs. with golden central portion of scales) and by the lack of scales on dorsal-fin soft portion (vs. present). It is distinguished from G. balzanii by a lower body depth and less branched dorsal-fin rays (10–11 vs. 12–15). It can be further distinguished from G. peliochelynion, G. labiatus and G. pseudolabiatus by the absence of thickening in the lips (vs. present); from G. gymnogenys and G. mekinos by the absence of a conspicuous and oblique dark band from the anterior margin of eye to the anterior border of head; from G. gymnogenys also by presence of elongated spots distally in the soft portion of the dorsal fin (vs. large round spots); from G. mekinos also by dorsal fin coloration (vs. spiny portion without markings, soft portion with only few dots, distally immaculate). Additionally, the new species differs from G. constellatus by a semicircular light blue spot on each scale of the midlateral spot (vs. large white spot) and by spiny posterior portion with short narrow stripes or spots (vs. long wide stripes) and soft portion with dots and lines distally (vs. long wide stripes); from G. tiraparae by lacking the over-developed head hump (hump starting only at the horizontal plane through the eyes, forming a concave profile of the snout in lateral view vs. hump starting already from the upper lip, forming a convex profile at eyes height) and by a different coloration pattern of the dorsal fin (spiny posterior portion with short narrow stripes or spots and soft portion with dots and lines distally vs. dorsal fin hyaline with two horizontal series of moderately elongated light blue dots between dorsal-fin spines, and a series of light blue stripes between soft rays, and a red ground color between the two series of dots); from G. lipokarenos by presenting a red distal margin on posterior half of dorsal fin (vs. red distal margin along the entire fin), by lower peduncle length 18.5–22.0% of SL (vs. 14.1–17.9% of SL in G. lipokarenos); from G. missioneiro by having the base of unpaired fins yellow (vs. red) and by the presence of separated dots in both the spiny and soft portions of dorsal fin (vs. long wide stripes in G. missioneiro); and from G. lacustris by having lips, branchiostegal membrane and isthmus grey (vs. orange), unpaired fin-bases yellowish (vs. light olivaceous to reddish), by hyaline or white spots on caudal fin (vs. longitudinal stripes), and by absence of a dark vertical stripe through the eyes (vs. present in G. lacustris) (Figs 1–3).
....

Etymology: The specific epithet is derived from the Guaraní word “jarýi”, meaning grandmother. It is dedicated to the Non-Governmental Organization of “Abuelas de Plaza de Mayo”, created in 1977 whose objective is to locate and restore to their legitimate families all the children disappeared by the last Argentine dictatorship. A noun in apposition.

Distribution: Gymnogeophagus jaryi is known from several tributaries of the Southern Middle Paraná: the Cuña Pirú basin, the Garuhapé basin, and the Ñacanguazú basin in Argentina, Misiones and, based on photographs and mtDNA sequences it is also present in the Manduviyú, Pirapó and Ype Curú basins in Paraguay. 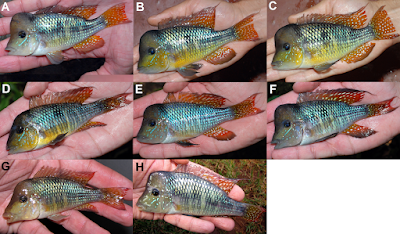 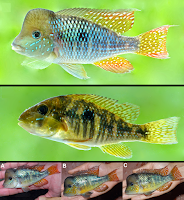