Abstract
A new species of the family Natricidae Bonaparte is described from a single specimen obtained in Arunachal State, northeastern India. On the basis of its external morphology and of its dentition on the upper maxilla, i.e. 24 + 3 distinctly enlarged teeth separated by a short diastema, it is referred to the genus Hebius Thompson. Hebius lacrima spec. nov. is distinguished from other species of the genera Hebius, Amphiesma Duméril, Bibron & Duméril and Herpetoreas Günther, by the combination of an elongate body, 19 dorsal scale rows at midbody, a distinctive broad, white band on the supralabials interrupted by a dark blotch below the eye, absence of dorsolateral stripes replaced by series of transversally elliptical or divided dorsolateral spots, a cream venter with lateral dark blotches, and scales of the first dorsal scale row entirely smooth. The interrupted, broad, lateral stripe of the head differentiates Hebius lacrima spec. nov. from all other species of the genera Hebius and Herpetoreas inhabiting the Indo-Himalayan and Indochinese Regions. This new species is compared in detail with other Asian species of Natricidae having 19 dorsal scale rows. 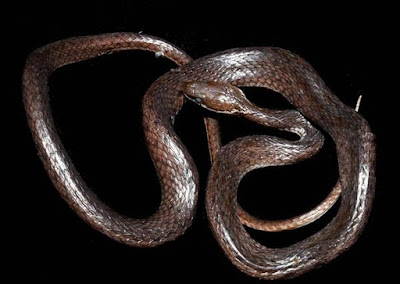 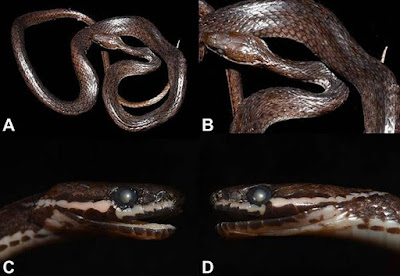 Etymology. The species nomen derives from the Latin noun lacrima (-ae), meaning “a tear”, a reference to the dark area under the eye looking like a black tear which interrupts the white supralabial stripe. This species nomen is a noun in apposition and not an adjective.We suggest the following common names: Crying Keelback (English).

Ecological notes. The single known specimen was obtained from a rice field alongside a hill slope (Fig. 3) in the outskirt of the city of Basar (Fig. 4), so in a heavily disturbed area. A small stream was flowing adjacent to this field. An indigenous agricultural practice called Jhum (shifting) cultivation was done in the hills adjacent to the rice field.