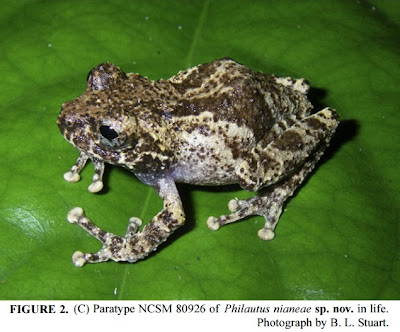 Abstract
The small rhacophorid frog Philautus abditus is geographically restricted to central Vietnam and adjacent Cambodia. Our fieldwork in northern Laos resulted in the discovery of a Philautus species that very closely resembles P. abditus, but is at least 330 km from the nearest known locality of that species. The Laos population differs from P. abditus in mitochondrial DNA and coloration, and is described here as a new species. Philautus nianeae sp. nov. is distinguished from its congeners by having the combination of a hidden tympanum; no nuptial pads; smooth skin; large black spots on the hidden surfaces of the hind limbs; light venter with dark spotting; and a bronze iris. A second species of Philautus from northern Laos, P. petilus, is transferred on the basis of morphology to the genus Theloderma.

Etymology. The specific epithet is a matronym for Dr. Niane Sivongxay, Professor of Biology at the National University of Laos, co-collector of the species, and cherished friend and colleague of the authors.